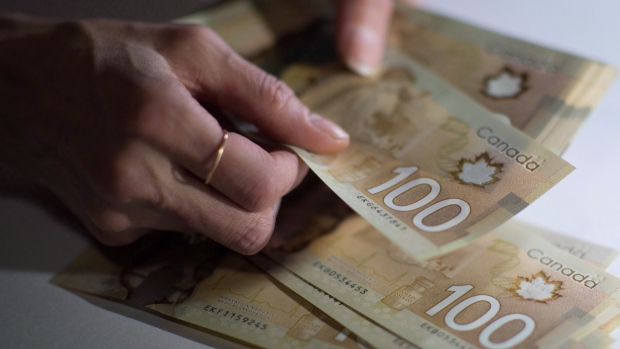 Parents looking at the bills rolling in as students head off to university and college may be wishing they had saved more. Canadian $100 bills are counted in Toronto in a Feb. 2, 2016, file photo. , THE CANADIAN PRESS/Graeme Roy, File

Many Canadians are paying their advisors and mutual fund companies to keep cash in money market funds that are actually racking up losses.

Money market funds, which invest in short-term debt securities, are commonly used as a safe, liquid way to store cash and generate returns in investment portfolios over the near term. A typical portfolio could hold tens of thousands of dollars in them, as investors bank cash in uncertain markets.

But rock-bottom interest rates are resulting in rock-bottom yields, which in some cases are smaller than the fees the funds impose.

Most mutual fund companies offer money market funds. Like any other mutual fund, investors pay for them through annual management expense ratios (MERs) based on a fixed per cent of the amount invested in the fund. The fees go toward fund management, administration, and in many cases to compensate the advisor who sold it in the form of a trailer fee.

A typical MER for a conventional Canadian money market fund is between 0.5 per cent and one per cent – often higher than the typical annual return. The funds themselves are designed to never lose money, but some funds are posting losses because of their fees. In some cases the fees are compounding the losses.

One example, according to fund-tracker Fundata Canada, is Russell Investments Money Market Class Series B. At the end of November it posted an annual loss of 1.06 per cent after charging an annual MER of 0.8 per cent.

Another example is CI Short-term Corporate Class A, which reported a loss of 0.02 per cent over the same period after taking its 0.78 per cent cut.

According to Fundata, at least five segregated Canadian money market funds are doing just that:

To rub salt in the wound, the largest single holding in many money market funds is cash because there is no better alternative. In those cases investors are literally paying someone to store their cash in a different account. With billions of dollars in money market accounts, the industry is skimming countless dollars from unsuspecting investors.

Investors with their savings in money market funds should question their advisors. There may be a deeper strategy that warrants paying them those trailer fees, but it’s likely the best place for your short-term cash is simply, in cash.