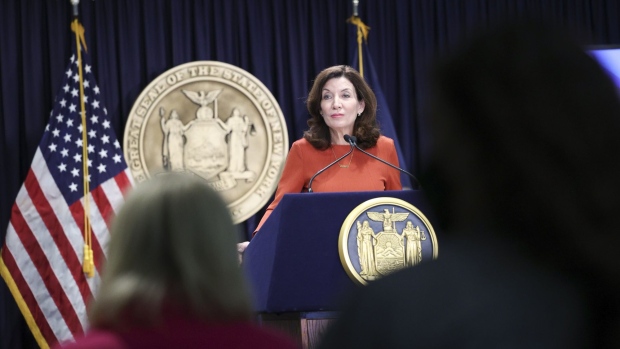 Kathy Hochul, governor of New York, during a news conference in New York, U.S., on Monday, Sept 30, 2021. A Covid-19 vaccine mandate for health workers that went into effect this week is working to boost vaccination rates, providing a road map to other states that are trying to fight the highly transmissible delta variant. Hochul said this week. , Bloomberg

The spending plan is Hochul’s first since taking over as governor in August after Andrew Cuomo resigned amid a sexual harassment scandal. Armed with a healthy supply of cash, the Democratic governor called for accelerating tax cuts instituted under her predecessor in 2016. Middle-class families would get full, phased-in credits amounting to $1.2 billion as early as 2023 rather than a yearly break through 2025.

Hochul’s budget proposal for fiscal 2023, which begins April 1, aims to help heal a state scarred from the pandemic that has yet to end. New York was the epicenter of the health crisis in the U.S. in 2020, and its economy still suffers as the coronavirus plagues businesses and discourages tourism.

In a speech on Tuesday, Hochul highlighted a focus on “the realistic and achievable.” She called for an additional $2 billion in pandemic recovery initiatives, $1 billion for infrastructure and another $1.2 billion in bonuses for health-care and front line workers.

“We know the federal funds will eventually run out,” she said. “You have to prepare for the rainy days.”

Spending growth is estimated at 3.1%, just below inflation, in fiscal year 2023 and grows by an annual average of 3.6% thereafter through 2027.

(Updates throughout with details from speech.)