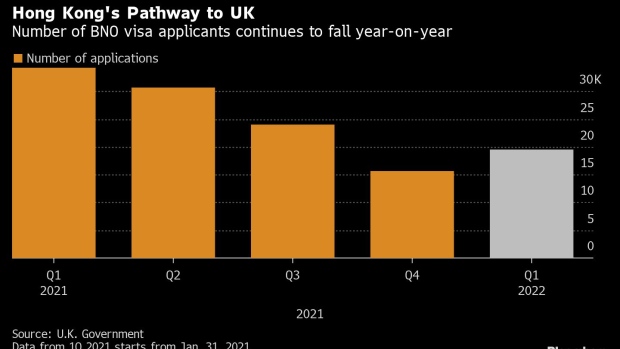 (Bloomberg) -- A visa program that offers Hong Kongers a pathway to UK citizenship saw its first quarter-on-quarter jump earlier this year, as the omicron variant of the coronavirus tore through the Asian city, killing thousands.

The number of applicants for the British National (Overseas) program between January and March jumped 25% from the previous three months, to 19,500. Chief Executive Carrie Lam implemented some of the city’s most stringent social distancing measures of the pandemic during this period and threatened to mass test all residents, with anyone infected facing isolation in government camps.

How a British Passport Offers Escape for Hong Kongers: QuickTake

Still, overall applications were down 57% from the shorter first quarter of last year, when 34,300 people initially rushed to apply after the program began on Jan. 31. Since then, some 123,400 people have applied.

The visa was drawn up in 2020 after Beijing imposed a national security law on the former British colony, which Prime Minister Boris Johnson described as a “serious breach” of the 1984 Sino-British Joint Declaration that guaranteed Hong Kongers certain freedoms for 50 years. Officials in London estimated that more than 320,000 people could take up the offer within five years.

So far, those born after the 1997 -- the year the UK handed Hong Kong back to China -- haven’t been eligible for the program, but the UK government said it intends to expand the program in October to younger people with at least one parent with BNO status.