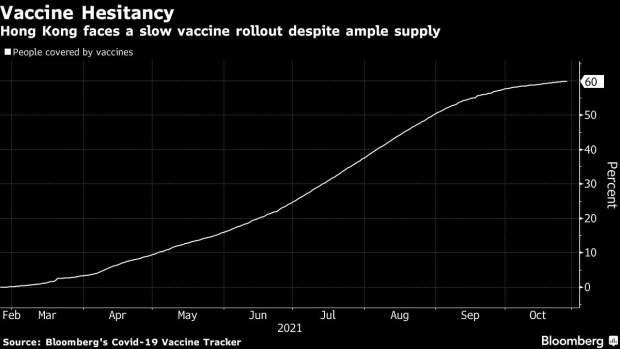 (Bloomberg) -- The elderly and other high-risk people in Hong Kong should get a booster shot, according to the government health advisers working to bolster the city’s Covid-19 immunity levels.

The shots should be offered to those over the age of 60, health workers, airport and customs staff and people with immune-compromised conditions, according to experts serving on panels for the Centre for Health Protection.

For recipients of shots from Sinovac BioTech Ltd., the additional dose could come from either the same provider or BioNTech SE -- the other available vaccine in the city, the advisers said at a media briefing on Wednesday.

For most BioNTech recipients, there’s no “good scientific reason” for them to choose Sinovac for booster shots because it’s less effective in activating the immune response, said David Hui, chairman of the Scientific Committee on Emerging and Zoonotic Diseases.

The recommendations pave the way for extra doses to be administered in Hong Kong, amid research being conducted across the world that suggests the efficacy of all the vaccines declines over time. Israel has administered millions of booster shots and is making preparations in case a fourth round is needed. The U.S. and U.K., meanwhile, started offering the extra shots widely last month, while Europe has endorsed third doses.

The experts also recommended that all Sinovac recipients get a booster shot at some point. Experts found antibodies produced after getting the Chinese vaccine are at nearly undetectable levels within eight months.

Some experts have questioned the need for the broad use of boosters, as existing vaccines reduce the risk of serious disease and death. The WHO called for a moratorium on them for most people this year, until the available vaccines are more widely distributed and poorer nations have better access.

Hong Kong has received Sinovac’s application to lower the age limit for innoculations to three, down from 18 years old, but the advisers said they haven’t made a decision yet. Currently, children aged 12 to 17 are allowed to receive shots made by BioNTech.

Authorities have vowed to keep working to eliminate the virus locally, even as other places that kept infection rates low -- including Singapore -- move toward a post-pandemic future with fewer safety restrictions. Hong Kong’s quarantine measures remain some of the toughest in the world, and have fueled concerns that it could be left behind as others reopen their borders.

While some people in Hong Kong may get a third shot, however, a large swath of the population is refusing to get even one. The hesitancy is mainly among the elderly, with just 47% of those over age 60 receiving at least one dose. Since the vaccination campaign began in February, 61% of residents have received their first shot, according to Bloomberg’s Vaccine Tracker. That compares with 83% for Singapore, its rival financial hub in Asia.

Among the 4.6 million people who have received at least one dose, about a third opted for Sinovac and two-thirds chose BioNTech. The city also procured 7.5 million shots from AstraZeneca, but plans to donate it all to Covax, a global vaccine program designed to help developing and middle-income countries get the inoculations.