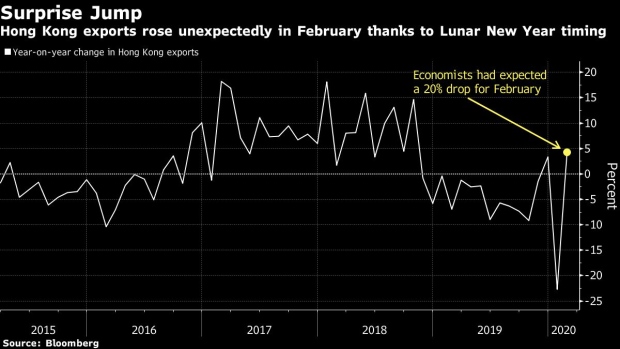 (Bloomberg) -- Hong Kong’s exports rose unexpectedly in February after plunging the most in more than a decade the previous month as the impact of the escalating coronavirus outbreak on global trade was offset by the timing of the Lunar New Year holiday.

Exports rose 4.3% in February from year-ago levels to HK$238.6 billion ($30.8 billion), better than the -20% median forecast among economists surveyed by Bloomberg.

The moderate increase in February stemmed largely from “distortions from the timing of the Lunar New Year,” the government said in a statement. The major holiday period fell in February last year and in January this year.

Taking the two months together, exports fell 12% in value terms, reflecting the serious disruptions to regional trade caused by the Covid-19 outbreak, the government said. The decline is the worst for a combined two-month period since 2009, according to data compiled by Bloomberg.

“The external trading environment has turned even more austere lately, as demand in most major export markets plunged amid the Covid-19 pandemic,” the government said. “As such, Hong Kong’s merchandise export performance will likely remain weak in the near term.”

The overall weakness in trade is the latest economic blow for Hong Kong as the spread of the coronavirus has seen the global economy grind to a halt. The city’s open port and close proximity to China leave Hong Kong particularly vulnerable to the increasing shutdowns.