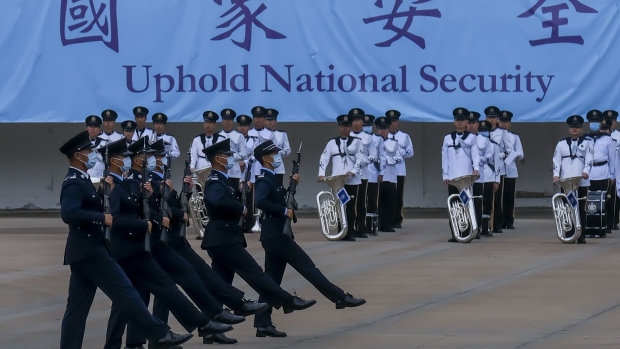 (Bloomberg) -- Hong Kong police will officially swap British-style marching for the “goose step” used in mainland China on July 1, as the city sheds signs of its colonial past under Beijing’s growing control.

“To promote patriotism and enhance the awareness of national identity, the Hong Kong Police Force will fully adopt Chinese foot drills from July 1,” the HKPF said in a statement to Bloomberg News.

Last year, China’s People’s Liberation Army trained Hong Kong police cadets on the goose-step style, whereby soldiers conduct foot drills without bending their knees. Since then, it has been used at local events to promote national security and adopted by the Customs Department.

The official switch will take place on the city’s 25th anniversary of Chinese rule, a crucial political event that President Xi Jinping is widely expected to attend in his first trip out of the mainland since January 2020. That date also marks the halfway point in Beijing’s 50-year pledge to maintain the liberal financial and political framework established during colonial British rule.

Britain has accused China of violating that agreement in recent years after Beijing imposed a national security law on the city that’s been used to crack down on dissent and purge the democratic opposition. Beijing also revamped Hong Kong’s electoral system to ensure only those loyal to China’s ruling Communist Party could hold a seat of power.

Earlier this month, it emerged that new school textbooks in Hong Kong would teach students the city was never a colony, saying the Chinese government never recognized the 19th-century treaties that handed Britain control of Hong Kong.