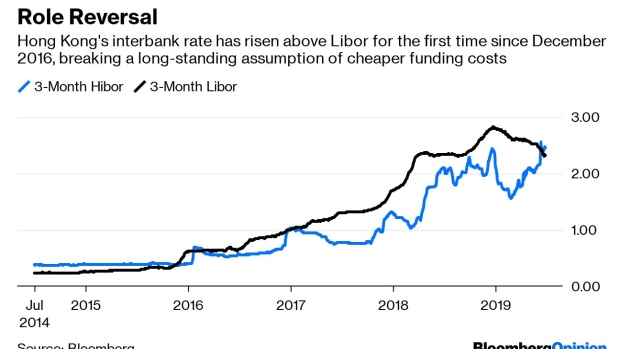 (Bloomberg Opinion) -- For years, global investors and financiers have identified Hong Kong as a wealthy, stable city. On many fronts, this assumption is now being called into question.

One may say this is just a sign that the Hong Kong Monetary Authority is doing its job. A shrinkage in the central bank’s aggregate balance causes interbank rates to rise: This is the mechanism that keeps the peg stable, raising the return for investing in Hong Kong dollars when liquidity flows out.

Nonetheless, soaring Hibor deals a blow to the city’s investment banks. Investors have long borrowed in Hong Kong dollars to fund the purchase of new IPO shares or dollar bonds. I documented how private bankers were offering up to 90 per cent margin financing for jazzy listings such as China Literature Ltd. during Hong Kong’s IPO frenzy in late 2017.

With one-week Hibor doubling since then, investors playing the IPO game will require a much bigger first-day pop to make a profit. That threatens to damp enthusiasm just as investment banks prepare for a couple of marquee listings. Alibaba Group Holding Ltd. has filed for a share sale that could raise $10 billion, according to Caixin, and the Asia-Pacific unit of Anheuser-Busch InBev NV is targeting as much as US$9.8 billion, IFRAsia reported Monday.

It’s a similar picture for dollar bonds. Private banks have long offered 60 per cent leverage to wealthy clients keen to buy into China’s high-yield developers. Higher borrowing costs may dim the appetite of these investors, too.

Meanwhile, speculation over whether Hong Kong will abandon the peg has caused some savers to question whether they should move funds into U.S. dollars. It’s never been a foregone conclusion for locals to keep spare funds in their home currency. As of 2018, roughly half of deposits in the city were denominated in the Hong Kong dollar, with more than a third in greenbacks.

Against this backdrop, the last thing Hong Kong financial firms need is another spike in borrowing costs caused by social unrest. The unprecedented ransacking of the legislature Monday has taken the city’s political crisis to a fresh level of intensity. Previous protests have coincided with increases in Hibor. Banks such as HSBC Holdings Plc can expect volatility in their net interest margins.

To be sure, the interbank tension could dissipate in a matter of days. Local rates tend to rise near the end of the first half, as banks improve deposit rate offerings to burnish their accounting numbers. Three-month Hibor fell slightly on Tuesday morning, the first trading day of the second half.

Global banks have long suffered from poor trading activity in their Hong Kong operations. They may be in for an even hotter and stickier summer than usual.