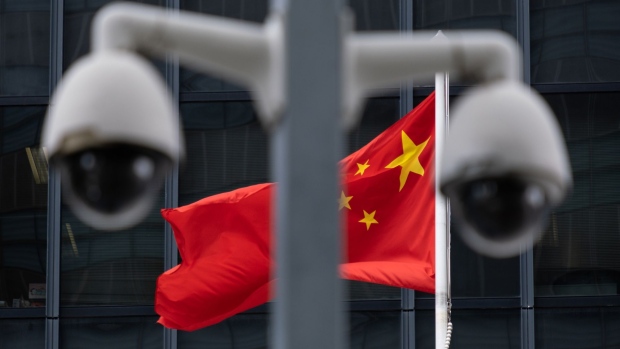 Supporters hold signs featuring images of some of the 47 pro-democracy activists arrested under the national security law ahead of a court hearing on July 8. Photographer: Chan Long Hei/Bloomberg , Bloomberg

(Bloomberg) -- Hong Kong has quietly broadened the language it uses to describe national security violations, a shift lawyers said could expand the reach of a government crackdown on dissent in the Asian financial hub.

City authorities have begun using the phrase “contrary to the interests of national security” in recent weeks to define new red lines in the entertainment industry and the tax code. Previously, officials had warned more specifically against anything that might “endanger national security.” The latter term appears 31 times in the full text of the security law, while the “contrary to” phrasing is absent.

That subtle shift could increase compliance risks for companies operating in Hong Kong, especially in sectors like technology and media that frequently bump up against political issues. Under the broader term, more people, groups and firms could be accused of security violations for espousing values that run contrary to the government’s stated interests.

The new term comes as authorities expand a crackdown on dissent to trade unions, charities, filmmakers and professional associations -- including for journalists -- that engage in what the government deems “political” activities. The city’s largest opposition newspaper, Apple Daily, and its biggest teacher’s union have ceased operation in recent months under government pressure due to their support for pro-democracy causes. “This shift in rhetoric suggests a move to embrace an even broader formulation of national security, and of national security crimes,” said Tom Kellogg, the executive director at Georgetown University’s Center for Asian Law. “We’ve seen a strong push to inject national security concepts into so many areas of Hong Kong life. It only makes sense that the government would use new rhetoric to deal with that broadening approach.”

Chinese officials have repeatedly said the security law would only impact a “very small minority,” and cited the continued strength of Hong Kong’s financial industry as evidence the legislation had not damaged the business climate. A Hong Kong government spokesperson didn’t respond to a request for comment.Read More on Hong Kong:

The new term first appeared prominently when the government proposed amendments to the Film Censorship Ordinance in late August at the city’s Legislative Council, which is now devoid of pro-democracy politicians after they all either resigned or were purged.

Authorities may want to avoid arguing a specific film endangers national security, Kellogg said, as there’s a lower bar to censor movies that “merely run contrary” to its interests. That concept could also be applied to education, the arts and internet regulation, he said.

The term appeared again last week in guidelines that allow the Inland Revenue Department to strip charities of their tax exempt status, if deemed to be “engaging in or supporting any acts or activities which are unlawful or contrary to the interests of national security.”

Hong Kong’s leader, Chief Executive Carrie Lam, also used the wording in a regular briefing last week as she discussed the tax changes, stressing the security law was intended not just to punish crimes, but to prevent them.

“If the charity engages in acts or activities that are contrary to interests of national security, then they won’t be exempt,” Lam told reporters. “A charity should not engage in political activities.”

The expanded scope could be used to pressure non-governmental organizations and charities into avoiding any criticism of the government, said Joseph Cheng, a retired political science professor and veteran activist who left Hong Kong shortly after the security law was imposed.

“The scope has been broadening,” he said. “And people feel under pressure for doing something totally harmless and totally professional.”

The ambiguity of the newer phrasing gives Lam and other officials the ability to “arbitrarily” expand the definition of potential violations, said Jerome Cohen, founder of the U.S.-Asia Law Institute at the New York University School of Law and one of America’s foremost experts on Chinese law.

“I would not underestimate the importance of ‘guidance’ in determining the meaning to be legally attached to ambiguous terms,” he said, noting that courts and legislators often defer to administrators’ interpretations of vague statutory terms.

“One thing seems certain,” Cohen added. “We can rely on the Hong Kong government and its communist bosses to seek maximum power over all activities.”