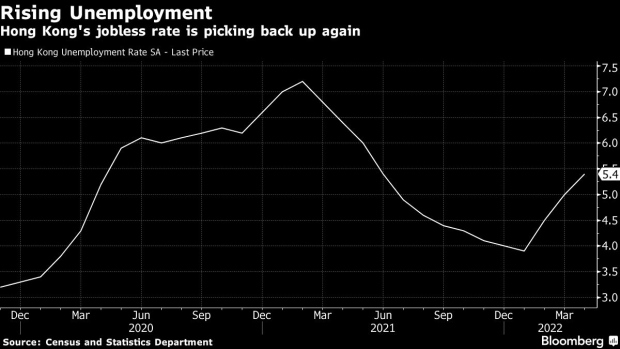 Morning commuters wearing protective masks make their way through Central district in Hong Kong, China, on Wednesday, Aug. 18, 2021. Hong Kong is caught between its desire to reopen and the government's zero tolerance for any cases of Covid-19, which has kept the virus out for most of the pandemic. , Bloomberg

(Bloomberg) -- Hong Kong’s unemployment rate surged to 5.4% for the three months ended April as the city’s Covid restrictions continued to weigh on businesses and keep people at home.

The jobless rate was worse than the 5% rate expected by economists in a Bloomberg survey. The figure is the highest rate since June 2021, when unemployment also reached 5.4%. The underemployment rate rose to 3.8% from 3.1%, the Census and Statistics Department said in a report Thursday.

While the labor market deteriorated further, “the situation showed some stabilization in the latter part of the period in tandem with the receding local epidemic and revival of local economic activities,” Secretary for Labor and Welfare Law Chi-kwong said in the release.

The elevated unemployment rate, which is compiled for a moving three-month period, is one of several challenges for Hong Kong’s economy, which is also contending with rising interest rates worldwide, struggling exports due to China lockdowns and higher global commodity prices. Last week, the government downgraded its annual growth forecast to a range of 1% to 2%, from a previous expectation of 2% to 3.5% growth.

Financial Secretary Paul Chan warned Sunday that the jobless rate was expected to deteriorate further, as the February-to-April period reflected the “peak of the epidemic” in Hong Kong.

“Nonetheless, the epidemic has been gradually brought under control in the past month or so and social distancing measures have been relaxed in phases,” he wrote in a blog post, adding that if infections remain stable, the unemployment rate will “gradually improve.”

Last week, government economist Adolph Leung told reporters at a press conference that the labor market was under “severe pressure.” But he pointed to support measures intended to improve the situation, such as a temporary unemployment relief plan and the issuance of consumption vouchers to spur demand.

Hong Kong is also continuing to relax its virus curbs, even as the city records hundreds of cases a day. From Thursday, restaurants can remain open until midnight, an extension of a previous 10 p.m. closing time. Bars will be permitted to open until 2 a.m., while mask requirements for indoor exercise will be lifted.