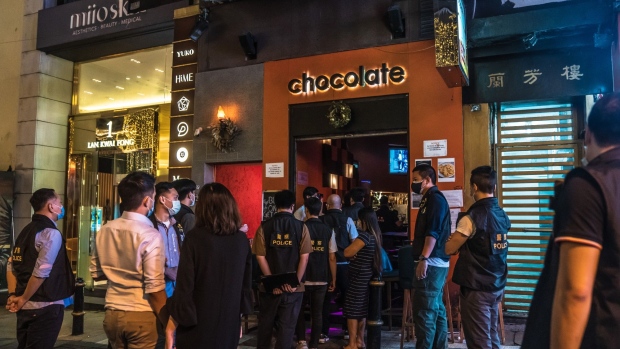 Police officers enter a bar in the Lan Kwai Fong nightlife area in Hong Kong, China, on Thursday, June 16, 2022. Hong Kong's bar and nightclub owners were caught off-guard when government officials announced that their patrons would have to show proof of a negative Covid-19 test in order to enter, starting today. , Bloomberg

Authorities said at a briefing that 118 of the new infections were imported, with the rest locally acquired. The city reported no new new Covid-related deaths nor infected patients that are in critical condition.

The daily case count topped 1,000 less than two weeks ago, which was the highest since mid-April.

On Saturday China’s official Xinhua News Agency reported that Xi would attend the annual July 1 ceremonies in Hong Kong -- his first trip to the former British colony since the sweeping crackdown on its pro-democracy opposition. The Chinese president will also attend the swearing-in of new Hong Kong Chief Executive John Lee set for the same day, the agency said without providing further details.

Xi’s decision to visit Hong Kong even as daily Covid cases approach 2,000 signals his determination to demonstrate Beijing’s control over the city. The trip will be his first outside mainland China since January 2020, after his Covid Zero policy closed the country’s borders, limiting him to virtual appearances at international events.

Two senior members of the incoming chief executive’s cabinet -- including his No. 2 -- tested positive for the virus last week.

Lee, a former top police official, was installed by Beijing in May to run the city for the next five years. This year marks the halfway point in Hong Kong’s 50-year transition from British to Chinese rule under the “one country, two systems” arrangement.