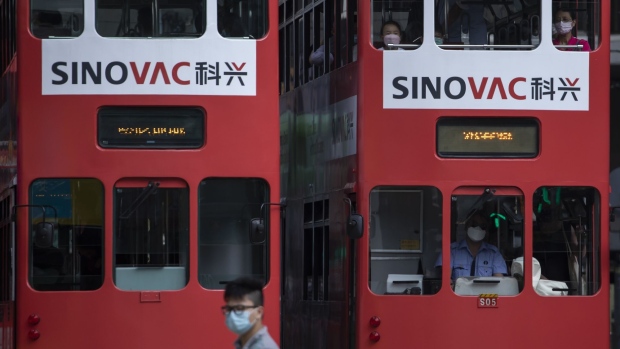 (Bloomberg) -- Hong Kong is testing whether people given Sinovac Biotech Ltd.’s Covid vaccine will fare better if they get a booster using BioNTech SE’s more potent mRNA technology, as evidence emerges about how quickly antibodies from the Chinese-made vaccine fade.

Questions have swirled about the effectiveness of the Sinovac shots, which were the first to be rolled out in Hong Kong starting in February and account for about one-third of immunizations given in the city. As recent research shows that protection from all the available immunizations ebb with time, Hong Kong officials decided to study the importance of which booster was used.

The trial involves 84 people given two doses of Sinovac’s shot who didn’t generate an adequate antibody response. They will be given another dose of the Sinovac vaccine or one made by BioNTech, then compared. The immunizations were completed this week and the results should be available in a month, said David Hui, a professor at the Chinese University of Hong Kong who leads an expert panel that advises the government.

“We will see which one has a better effect from the booster,” Hui said in an exclusive interview with Bloomberg on Thursday. “We will give this data to the government so that they can examine whether to change the vaccine platform for those who have taken Sinovac when they do the booster.”

A growing number of countries that have relied on Sinovac’s vaccine are now eyeing boosters given the emergence of the more transmissible delta variant.

Studies have found a substantial gap in the level of antibodies produced after immunization with an mRNA vaccine, such as those made by BioNTech and its partner Pfizer Inc., and inactivated shots like those from Sinovac and other companies. The inoculations still spark other parts of the immune system, including infection-fighting T cells that offer more durable protection.

“The antibody levels are near undetected after six to eight months because of the limitation of the inactivated vaccine platform,” Hui said. “The T-cell response still remains, which can protect people from serious illness and death. However, the antibody level is too low, and cannot protect them from infection.”

Hong Kong’s move comes after the city’s health advisers said there isn’t an urgent need to give residents booster shots since there haven’t been any outbreaks in the past three months. The decision runs counter to what many other major economies are doing, including China, which plans to start booster shots this month for people at high risk of contracting Covid-19.

It’s not just Sinovac’s shot. Pfizer recently submitted data to U.S. regulators showing its shot also lost potency over time, as people who were vaccinated months earlier were more likely to develop breakthrough infections than those who were inoculated more recently. Booster shots, the company said, safely prevented transmission and the development of new variants.

It is unclear how effective the Sinovac shot will be as a booster in the real world, though studies in China suggested a third dose boosted antibody production and stabilizes them at a higher level. The Chinese vaccine was less potent than Pfizer’s at stopping Covid-19 in places where the two shots were used simultaneously. Real-world examples also show the Sinovac shot’s ability to quell outbreaks requires the vast majority of people to be vaccinated.

“Those who have taken Sinovac are more in need of obtaining the booster vaccines,” Hui said.