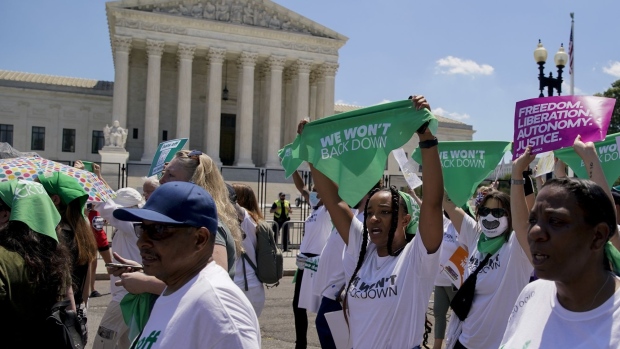 Abortion rights demonstrators during a protest outside the US Supreme Court in Washington, D.C., US, on Thursday, June 30, 2022. President Biden today said he would support changing the Senate's filibuster rules to pass legislation ensuring privacy rights and access to abortion, calling the Supreme Court "destabilizing" for controversial decisions, including overturning Roe v. Wade. , Bloomberg

(Bloomberg) -- House Democrats are attempting a likely doomed effort to expand federal funding for abortions under Medicaid as progressives grasp for ways to respond after the Supreme Court last week ended the nationwide right to an abortion in place since 1973.

A $242 billion bill funding the departments of Health and Human Services, Labor and Education would drop the so-called Hyde Amendment for the first time since 1976. That provision bans the use of federal funds for abortion except for cases of rape, incest or when the life of the mother is at risk.

The restriction means that patients enrolled in the federal Medicaid program in 34 states and the District of Columbia do not have coverage for most abortions. In other states, state governments cover the cost of abortion services.

“With the radical court decision of last week it is more important than ever that we act to empower all women to be able to make deeply personal life decisions without politicians inserting themselves into the doctor’s office,” Appropriations Chair Rosa DeLauro, a Connecticut Democrat, said.

But the Democratic effort to strip the Hyde Amendment is unlikely to succeed so long as the Senate’s 60-vote threshold to end a filibuster remains in effect. At least 10 Republican votes will be need needed to pass annual funding bills in that chamber, and there is no support in the GOP for ending the restriction. That could present hurdles to coming to terms on a final HHS funding bill for the fiscal year that begins Oct. 1.

The committee vote to advance the bill was 32-24.

During a heated debate, Oklahoma Republican Representative Tom Cole offered an amendment to restore the Hyde provision and a separate provision allowing doctors who object to abortion to refuse to perform the procedure without facing retribution.

“Even many Americans who consider themselves pro-choice do not support tax payer funding for abortion,” Cole said.  He noted that Democrats abandoned their attempt to strip the Hyde amendment earlier this year from the 2022 spending bill in the face of Senate Republican opposition

Texas Democrat Henry Cuellar voted with Republicans to restore the Hyde amendment,  but that effort failed.

Democratic Representative Debbie Wasserman Schultz of Florida said that in the wake of the court’s decision, “we must do all we can to fight government mandated pregnancy.”

Committee Democrats added a measure to their Justice Department funding bill that would block federal prosecution of women crossing state lines to have an abortion, or of people helping them. And they eliminated longstanding restrictions funds to pay for abortions for women in federal custody, and federal and local funds to pay for abortion in the District of Columbia.