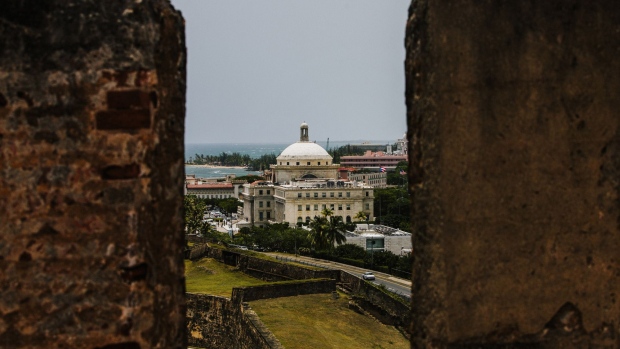 The Capitol Building is seen past walls in the Old City of San Juan, Puerto Rico. , Bloomberg

(Bloomberg) -- A group of House Democrats on Friday introduced a long-shot bill that would overhaul the federal government’s relationship with Puerto Rico, allow an independent audit of the commonwealth’s billions in debt and give local authorities the power to discharge unsecured debt deemed excessive.

The proposal by House Natural Resources Chairman Raul Grijalva and other lawmakers would make sweeping changes to the Puerto Rico financial rescue law, known as Promesa. But it’s unlikely to find much support in the Republican-controlled Senate if it makes it out of the House.

Among its key provisions: the bill defines the commonwealth’s public health care, education, safety and pensions as essential public services, making it harder for them to be cut by the federal board that oversees the territory’s finances. It also guarantees funding for the University of Puerto Rico and requires the federal government to finance the operation of the oversight board.

The bill amends the Promesa Act, which was passed in 2016 as the U.S. commonwealth staggered under $120 billion in debt and unfunded pension obligations. That law created the Fiscal Oversight and Management Board, a federally appointed body that’s supposed to help restructure the island’s debts as it pursues a form of bankruptcy.

The oversight board and the local government often clash over spending and the budget, and the “junta,” as it’s known on the island, has become synonymous with Washington’s control over the Caribbean island.

“The crushing fiscal austerity imposed by the original Promesa law has failed to improve economic development or fix chronic poverty in Puerto Rico, so it’s time for a more people-focused approach,” Grijalva, an Arizona Democrat, said in a statement. “Whatever your politics, we can all agree when a course of action isn’t working as intended, and Promesa is not working for the people who need it most.”

Velazquez said the austerity measures that the oversight board has imposed have “put hedge funds and speculators’ profits ahead of the people of Puerto Rico,” noting that the legislation will allow the island to “write down much of its unsecured debt.”

“With Covid-19 and the current crisis, it is more important than ever that we give the Island a way out from under suffocating debt,” she said.

Puerto Rico, a U.S. territory of 3.2 million people, has been lurching through years of economic recession and is still recovering from the 2017 hurricane season, a series of earthquakes that began late last year and the Covid-19 pandemic.

President Donald Trump and local leaders have had a contentious relationship. While Governor Wanda Vazquez has said the island’s territorial status is what’s keeping it from flourishing, Trump has often characterized the local government as inept and corrupt.