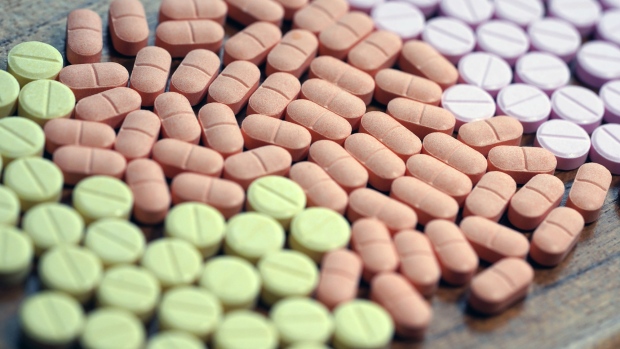 Tablets are arranged for a photograph at an Apotik Mahakam pharmacy in Jakarta, Indonesia, on Thursday, July 11, 2019. Indonesia with a population of 260 million spread across more than 17,000 islands, has only two physicians for every 10,000 people, behind the 8 in India, and 26 in the U.S., according to the World Bank. , Bloomberg

(Bloomberg) -- A drug-price proposal from Democrats in Congress would save taxpayers $345 billion over a seven-year period, according to a new estimate, punching a hole in pharmaceutical company sales and causing ripple effects in health-care systems around the world.

The bill, H.R. 3, is backed by Speaker of the House Nancy Pelosi and other Democrats in the chamber. It would direct Medicare, the U.S. government health program for the elderly and disabled, to set pharmaceutical prices based on an index of what other developed nations pay for top-selling drugs. For products not sold abroad, the government would set their price at a discount to what U.S. purchasers paid.

The result would be huge savings to taxpayers, and far-reaching effects in the pharmaceutical industry, according to the analysis released Friday by the nonpartisan Congressional Budget Office.

Drugmakers would raise their prices in other countries to compensate for lower prices in the U.S. For new drugs, pharmaceutical companies would likely introduce them at higher prices to try and offset discounts. And there would be a slight decrease in the number of new drugs developed, the CBO projected.

With the toxic politics of impeachment pervading Washington -- not to mention a wide gap between the Democrat-controlled House and the Republican-led Senate -- the bill is a longshot to become law. But the $345 billion risk to the drug industry shows just how high the stakes can be in any drug price overhaul.

President Donald Trump has repeatedly called for the government to negotiate drug prices, and has even directly phoned industry leaders whose companies raised the cost of their products.

In the Senate, Republicans and Democrats have worked together on their own bill. Pushed by Senator Charles Grassley, the Iowa Republican, the package would cap drugmakers’ price increases, pegged to inflation, and would limit out-of-pocket spending by people on Medicare.

The lawmakers have said the bill would save taxpayers around $100 billion over a decade.

To contact the reporter on this story: Drew Armstrong in New York at darmstrong17@bloomberg.net

To contact the editors responsible for this story: Drew Armstrong at darmstrong17@bloomberg.net, Rob Golum