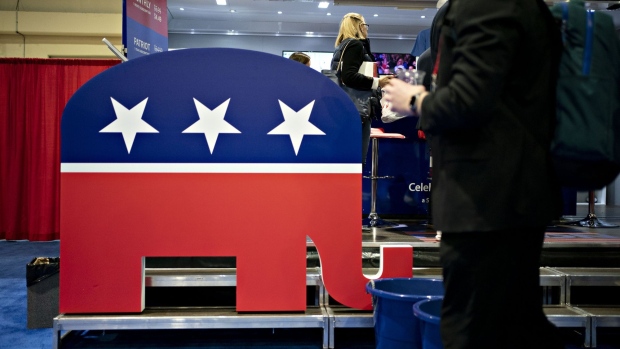 The Republican Party (GOP) elephant mascot sits on display in the exhibition hall during the Conservative Political Action Conference (CPAC) in National Harbor, Maryland, U.S., on Friday, Feb. 28, 2020. President Trump will address this years CPAC after seeking to close ranks within his administration about the threat posed by the coronavirus and how the U.S. government plans to stop its spread following mixed messages that rattled Wall Street. Photographer: Andrew Harrer/Bloomberg , Bloomberg

(Bloomberg) -- The National Republican Congressional Committee, the fundraising arm of the House GOP, raised a record $14 million in May and ended the month with more than double the amount it held at the same point two years ago and $6 million more than its Democratic counterpart.

Both parties will have plenty of cash as they compete for control of the narrowly divided House of Representatives in 2022.

The Democratic Congressional Campaign Committee raised $9.9 million in May, according to its filing with the Federal Election Commission, a record total for May in an off-year, and ended the month with $36.1 million in the bank. That was $19 million more than the DCCC had at the close of May in 2019.

The DCCC raised $3.5 million from small-dollar donors, those who contribute less than $200, its filing shows. Big donors included investor Bernard Schwartz, who gave the maximum donation of $255,000 via a fundraising committee run by House Speaker Nancy Pelosi, and Deborah Simon, a philanthropist and the daughter of the late Melvin Simon, the billionaire shopping mall and real estate developer, who gave $248,500.

Neither party has any debt. The Republican National Committee boosted the NRCC’s receipts with a $5 million contribution. The NRCC has yet to file its report with the FEC, which is due on Sunday.

“May’s record-breaking fundraising numbers are just the latest indication that House Republicans are primed to retake the majority,” Representative Tom Emmer, the NRCC’s chairman, said in a statement.

Republicans have a chance to regain control of the House after having lost it in the 2018 election. The party went on to lose the presidency and the Senate in 2020. The House chamber is narrowly divided, with Democrats holding 220 seats compared to 211 for Republicans, with 4 vacancies. The Senate is split 50-50.