In the land of rising household debt, Canadians have one more thing to worry about.

Delinquency rates are moving higher as the cost of living increases and servicing debt takes a bigger share of disposable income, according to TransUnion Canada.

The credit reporting firm said Monday 5.54 per cent of consumers were 90 or more days past due on at least one non-mortgage credit product in the third quarter, compared with 5.25 per cent in the same period in 2018. The 29 basis point increase is the largest since 2012, and comes after several years of declining or little changed delinquency rates.

“We are seeing a definitive shift” in delinquency rates, Matt Fabian, TransUnion Canada’s director of research and consulting, said by phone from Toronto. “The fact that it’s starting to increase could be an early warning signal.”

Price inflation for everyday consumer items such as food and clothing are accelerating, and costs for servicing debt are higher, meaning for the average Canadian, there’s “generally a tightening in the wallet,” Fabian said. 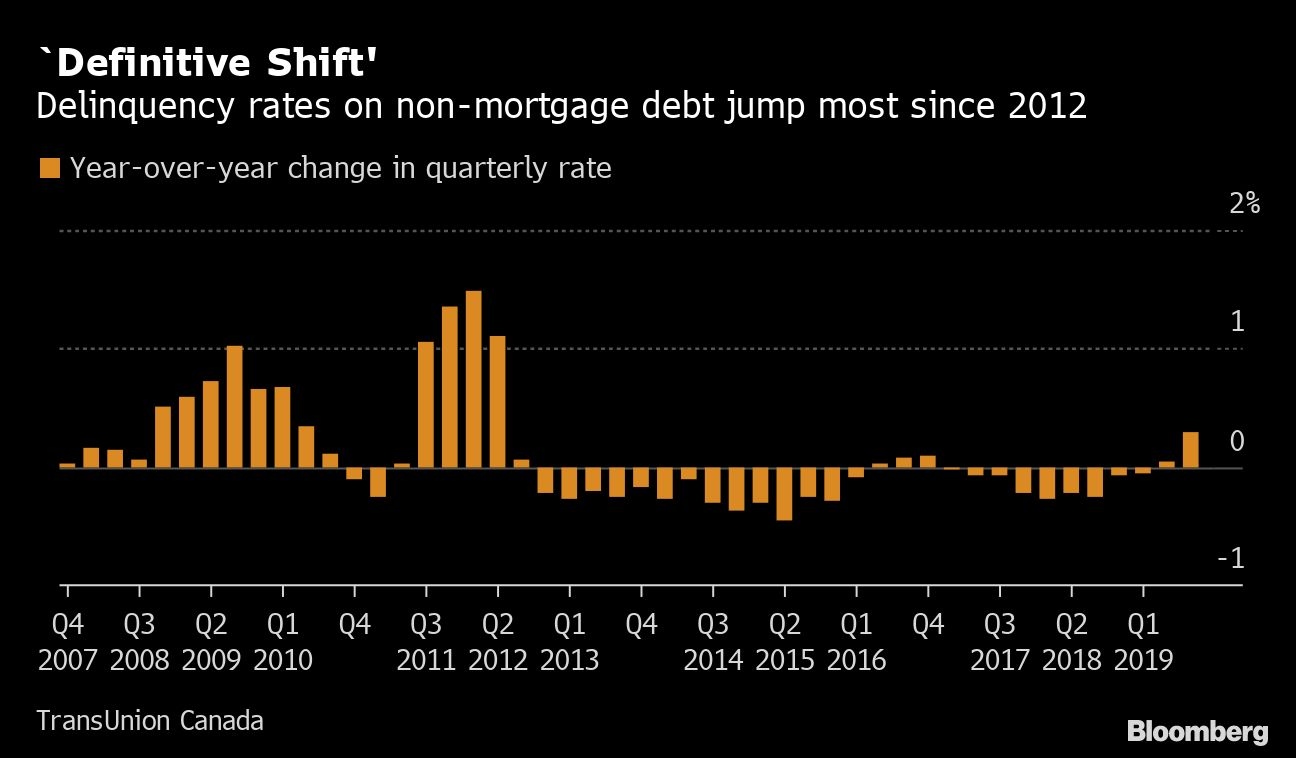 The report is in line with other indicators showing Canadian consumers are increasingly under strain. The Office of the Superintendent of Bankruptcy said last month insolvency filings are rising at the fastest pace since 2009. Earlier Tuesday, the country’s banking regulator ordered the largest lenders to set aside more capital to guard against vulnerabilities.

TransUnion still expects “broadly stable” delinquencies over the next year, partly as credit growth slows and also due to the relatively positive economic outlook. Still, there’s a potential for “regional shocks” to lift the national average.

• TransUnion sees “the possibility for regional economic shocks across Canada contributing to a slight rise in overall delinquency.” It cited struggles in the energy sector and the impact of trade restrictions on agricultural producers.

Fabian said the latest Canadian labour force report, which showed a loss of 71,200 jobs loss in October, the most in a decade, is a concerning sign, given the strong correlation between unemployment and delinquency. He added there’s usually a two to three month lag between a spike in job losses and a related increase in late payments.

“It takes a while for funds to run dry,” he said. “That’s when we see the wallet get tighter for a lot of people.”