How CubicFarms is feeding a changing world with its automated indoor growing technology - BNN Bloomberg
{{ currentBoardShortName }}
Markets
As of: {{timeStamp.date}}
{{timeStamp.time}} 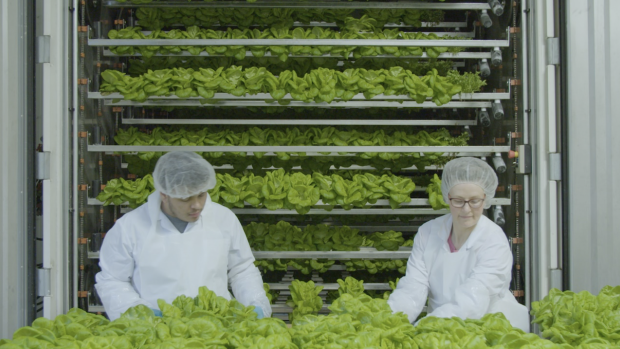 The ability to move people and goods across long distances will always be at risk of disruption because the longer the supply chain, the more chances there are for things to go wrong.

The farming industry was already in the midst of a labour crisis even before this year, with fewer and fewer workers available to tend to fields. Now with borders being shut, it's unclear how many foreign workers will be able to return to their jobs, despite some having been issued flight exemptions.

Because of this continued downward trend, Canada is currently projected to lose 123,000 workers within a decade, according to a report done by RBC. That represents a loss of $11 billion in GDP, if the labour gap continues to widen.

Couple this labour shortage with changing weather patterns like the devastating cold snap in Texas, the shipping container crisis, and the ongoing demand for fresh produce, and you’ve got a perfect storm against the food industry.

These stacked variables have revealed just how vulnerable the global food supply chain is. Farmers are now scrambling to find sustainable alternatives to what appears to be a crumbling framework.

"We believe long food supply chains are dangerous. As a technology company in the agriculture business, we’ve seen the challenges with growing outdoors. The solution is in using technology to make locally grown produce more widely accessible, 365 days a year, not just here, but anywhere in the world.”

Innovative new agriculture technologies like indoor vertical farming are more attractive to farmers who want the stability and consistency that come from harvesting indoor crops. Innovators in the agriculture space have already anticipated this shift and are now offering ways to safeguard against further threats to cultivation.

The technology is improving rapidly with automated, commercial scale indoor growing systems that grow fresh produce in a controlled environment. These crops can be harvested with less labour than traditional farming, addressing the need to do more during labour shortages.

By creating the ideal indoor environment onsite, growers use LED lighting, less land, significantly less water, and less energy. In Canada and the U.S., in particular, the ability to grow fresh produce during the winter months allows farmers to expand the growing season to 12-months a year.

Disruptions to the supply chain during the ongoing pandemic have sent food distribution centres searching for more local produce. We can expect that demand to rise as the number of growers using indoor vertical farming systems increases.

A new leader in agricultural automation

For a better look at these automated indoor growing systems, Canadian ag-tech company, CubicFarm® Systems Corp. (TSXV:CUB), offers insights into how this technology is the future of agriculture.

Different from other companies in the ag-tech space, CubicFarms began with the farmers themselves. Jack Benne and his son Leo Benne visited a farm in Puerto Rico after a hurricane when they had an idea for an automated indoor growing system that could grow produce in any weather.

Being the principles behind Bevo Farms, one of the largest propagation greenhouse systems in North America, they put their considerable expertise to work on this important problem.

The automated systems they created are now at the forefront of solving the supply chain woes of countries that must rely on outside suppliers for their fresh produce. The potential for this shift is massive.

A local supply chain would reduce long distance shipping/flights, the indoor controlled environment is pesticide and herbicide-free so there would be fewer shortages due to recall (think of the recent romaine E. coli scares), and there would be less food waste, as produce is harvested at peak freshness instead of days or even weeks in advance.

Under traditional supply chains, there is an expected amount of rot, unnecessary waste of food and profits in each shipment, and it’s a wonder that’s considered tolerable.

The CubicFarm System technology is housed within modules that are 40 ft by 8 ft, standing 9.5 ft tall. The beauty of their structure is that farmers can buy as many modules as they need and place them together, creating indoor fields with the ideal controlled environment year-round.

A patented undulating path is used to move crops throughout the module. Plants are cycled through each module on suspended trays, which periodically pass an artificial LED light source along with regulated CO².

This is different than the typical ‘rack and stack’ vertical farming setups which need more space to allow people through to seed, monitor, and harvest plants. The CubicFarm System brings the plants in a full circle once every 90 minutes.

This allows for harvesting to easily take place at the front of the module, while sensors monitor the plants from the inside. This also prevents leaf burning, sometimes seen in vertical farms when the plants are too close to the light and heat source, or those suffering the ill-effects of their position too high or too low in the rack for the ideal amount of CO² necessary for healthy growth.

The CubicFarm System uses a propagator, which grows seeds into seedlings, and a cultivator that takes crops from seedlings to harvest.

This is all while being provided with the necessary nutrients and using up to 95 per cent less water than traditional farming. This line can replicate the exact growing conditions to yield the perfect leafy greens, herbs, and microgreens every time.

"When you provide the optimal environment every day for a crop, it won't only reward you by growing as fast as possible, but it will also be more delicious and nutritious," Dinesen notes.

This significant relationship is appealing to anyone looking to get into the supply chain, which can be challenging for smaller farming operations.

Farmers have long been at the forefront of technology when it comes to new machinery and systems. “Farmers are the most innovative people we know,” explains Dinesen. “In technology terms, this is the Tractor 2.0. After the invention of the tractor, no one would plow a field without one. With the automated, onsite, and commercial scale of the CubicFarm System, no one would want to grow indoors without us.”

While it might sound complex, farmers who use CubicFarm System will immediately notice its simplicity. When a new unit arrives on site, it's already 90 per cent ready to go, and the remaining set up is assisted by a hands-on customer experience team.

Farmers are trained on how to maximize each module's potential and are given resources for developing new crops. With the recently announced addition of Edoardo De Martin, former Microsoft Vancouver GM, to the executive team as Chief Technology Officer, we can expect the next generation of growing technologies to use more artificial intelligence and robotics to enhance their existing automations and efficiencies.

From fresh food to livestock feed

In January of 2020, the company's success and expertise led to the acquisition of a second farmer-founded innovative company called HydroGreen Inc. Another patented indoor farming system, the HydroGreen Grow System is focused solely on the production of fresh, nutritious livestock feed. Feed that would once be grown across acres of grazing land is now produced in a module that's a fraction of that size.

It is a necessary innovation for ranchers who are facing land and water scarcity issues. Dihl Grohs developed the technology for growing nutritious livestock feed for his ranches in South Dakota, Utah, and Missouri. The concept of low-maintenance feed growing was in direct response to the areas where his cattle had limited precipitation.

At the EcoDairy in Abbotsford, British Columbia, where they produce milk and use agritourism to educate people about where their food comes from, owner Bill Vanderkooi is using HydroGreen for his dairy cattle.

In a video interview, Vanderkooi talks about incorporating HydroGreen livestock feed into the current mixture and replacing some grain and forage in the cattle diet, measuring against a control group for differences in performance, production, and health. “At the early stage of the trial we’re seeing some positive benefits on performance.” Ongoing research into the nutritional benefits will be combined with land, water, and energy usage as factors for farmers.

The HydroGreen Grow System uses 92 per cent less water and less land than traditional farming, so it’s expected that this technology will be widely embraced by the livestock industry in the future.

The fresh livestock feed can be used for a variety of animals, but it’s mainly used for dairy and beef cattle. For those facing labour shortages, the HydroGreen module operates with the push of a button and is self-cleaning. Growing predictable amounts of fresh livestock feed indoors and onsite, will allow farmers to reduce the unpredictability that can be costly and dangerous to their animals and livelihoods.

CEO Dave Dinesen considers the HydroGreen Grow System to be the most automated livestock feed growing technology on the planet.

He explains, "When it comes to animal health and nutrition, the HydroGreen Grow System is giving the most nutritious and delicious livestock feed to these animals. They’re healthier, the feed is more consistent, and ranchers can become more self-sufficient.”

“It’s also automated and scalable, because we have the technology to make this possible and profitable,” he adds.

“At the end of the day, we’re a technology company, not a produce or livestock feed company, so we don’t compete with farmers. They become our farmer partners and it’s our job to advance the technologies that support their businesses.”

With a $5 million investment from top ag-tech investor, Ospraie, and a 100-module sale (their largest yet) to a farm in Surrey, B.C., CubicFarms’ momentum is only growing. It's this momentum that will continue to cultivate new acquisitions, like HydroGreen, and propel the company into an expanding market.

CubicFarms also has an R&D Innovation Centre that is continuously creating new crops and streamlined growing practices to benefit the growers using their technologies, including the CubicFarm System and the HydroGreen Grow System. It's a hopeful progression in a time when there seems to be a new crisis emerging every month. With technology like this positioned to revolutionize global food supply and essentially end hunger, it's one fewer crisis we have to face in 2021.

Learn more about CubicFarms by visiting their website here.

For more information about the CubicFarm System, watch this overview video to see it in action.