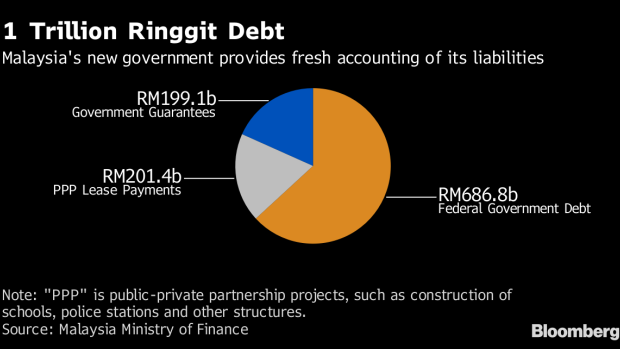 A man standing below signage for the Malaysian Anti-Corruption Commission is reflected in a window at the agency's headquarters ahead of the arrival of former Malaysian Prime Minister Najib Razak in Putrajaya, Malaysia, on Thursday, May 24, 2018. Najib is at the center of investigations looking into the Malaysian state investment fund known as 1MDB and whether it was used for embezzlement or money laundering. Photographer: Joshua Paul/Bloomberg , Bloomberg

(Bloomberg) -- Malaysia’s scandal-plagued state investment fund 1MDB has a 143.75 million ringgit ($36 million) bond coupon payment that may still be due this month. With the company unable to repay debt, the government has said it will honor 1MDB’s obligations as it had done since April 2017.

This is what you need to know about 1MDB’s path to insolvency, the debt commitments that the government’s earmarked 38 billion ringgit for, and who else could be saddled with payments.

What is 1MDB and how did it get so indebted?

1Malaysia Development Bhd. took shape in 2009 under former Prime Minister Najib Razak as a vehicle to drive investment into Malaysia and boost the country’s assets overseas. Early initiatives included buying privately-owned power plants and planning a new financial district in Kuala Lumpur, and it raised more than $8 billion via bond sales to do so.

Plagued by heavy debt and questions about its management and investment decisions, 1MDB grew into a scandal that moved closer and closer to the heart of government, culminating in global probes into alleged embezzlement and money laundering. Investigations and audits suggested not all the money the company raised were used as intended (U.S. investigators allege a small group of Malaysians may have diverted more than $4.5 billion from the fund.)

Cash flow problems emerged, made worse by a failed attempt to sell shares in its energy unit. 1MDB missed due dates on bank loans and defaulted on coupon payments in 2016 amid a dispute with the co-guarantor of two of its bonds.

What triggered disclosures of 1MDB’s insolvency?

A new government came to power this month in a shock election victory and quickly reopened investigations into the fund. That includes figuring out if any of its money ended up with Najib, who once chaired its advisory board, and reaching out to global investigators who had complained of a lack of cooperation from Malaysian authorities under the previous administration.

The day after Finance Minister Lim Guan Eng was sworn into office, he said the government had been "bailing out" 1MDB since April 2017 in coupon and debt settlement obligations. That was contrary to previous statements by 1MDB that payments were made from the fund’s rationalization exercises, he added.

Lim said PwC will be appointed to conduct a special position audit and review to uncover "the true financial state of affairs" at the fund and "determine the cost of the shenanigans to the taxpayers."

Exactly how much debt are we talking about?

Data compiled by Bloomberg show 26.3 billion ringgit in bond principal due by 2039. That doesn’t include a $1.75 billion bond that was a private placement, and when interest on all its borrowings is included, calculations show the liability climbs an estimated $3.1 billion at the current exchange rate. That brings the total to about $11.5 billion. The finance ministry couldn’t immediately confirm Bloomberg’s calculations.

Here is a summary of the bonds:

Will bondholders get paid and by whom?

Malaysia’s new government has said it will pay 1MDB’s debtors. The finance ministry said it has made 6.98 billion ringgit of payments for 1MDB since April 2017, including 5.05 billion ringgit as part of a debt settlement with IPIC.

If the Malaysian government changes its mind on its 1MDB liabilities, IPIC may have to come through. It did so in 2016 when it was compelled to make two interest payments on 1MDB debt, after the latter refused during a dispute. In 2017, a settlement agreement showed 1MDB and the Malaysian finance ministry undertook to IPIC that they would assume responsibility for all future interest and principal payments under the two bonds.

IPIC completed a merger with sovereign wealth fund Mubadala Development Co. last year. A Mubadala representative declined to comment on 1MDB’s insolvency and agreements with it.

Credit rating companies and economists have long raised risks related to Malaysia’s off-budget debt, even though the previous government made strides in bringing the fiscal deficit down to 3 percent of GDP.

Still, the ratings companies have said a default on 1MDB’s bonds would have a limited impact on the sovereign’s other notes, and the country can bear its debt burden along with the fund’s. Standard & Poor’s said this month it doesn’t see 1MDB affecting Malaysia’s rating, while Fitch Ratings said it had long viewed the fund as a close contingent liability of the sovereign.

--With assistance from Mahmoud Habboush.

To contact the reporter on this story: Elffie Chew in Kuala Lumpur at echew16@bloomberg.net

To contact the editors responsible for this story: Ben Scent at bscent@bloomberg.net, Yudith Ho, Shamim Adam