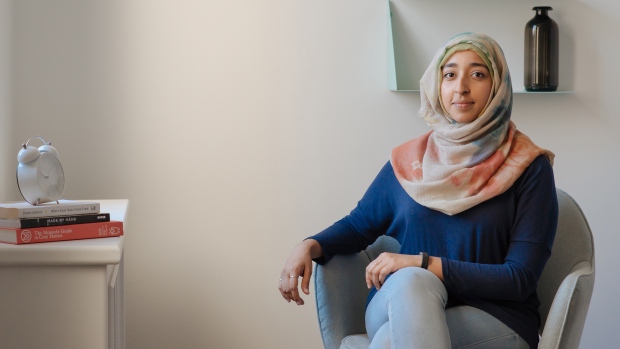 This is part of BNN Bloomberg’s series on the summer jobs that helped shape the careers of Canadian business leaders.

Huda Idrees says summer jobs weren’t really a thing in Jeddah, where she grew up.

Idrees, founder and CEO of digital health-records platform Dot Health, said Saudi Arabia didn’t have a culture where kids worked summer jobs. So, before she eventually moved to Toronto to attend university, she had never worked for another person.

“A bunch of other 17-year-olds in engineering school all had a bunch of summer jobs, and I hadn’t. I saw that as a huge drawback,” Idrees said in a phone interview with BNN Bloomberg.

Regardless, her younger self found other ways to gain experience and make some money.

For example, when Idrees was seven, she and her sisters devised a money-making summer project that involved manufacturing and selling a novelty item: origami paper products. Idrees’ job was to sell the wares to her peers at summer camp.

They called themselves The Handy Company. With the help of an origami instructional book, they crafted various paper-based products including notebooks, toys and jewelry, and charged anywhere from about 6 riyals ($2) to 10 riyals ($3.50) per item.

And because all of the resources were stolen from their dad’s office, all the money from sales was “pure profit.”

“The oldest one who had the idea [for the business] got most of the profit, and the rest of us got little bits of pieces of it, to basically buy junk food,” Idrees said. “This was not real money.”

While it didn’t pay much, that project — along with the inspiration bestowed by an entrepreneurial father — set Idrees on a path of launching her own enterprises and disrupting industries as an early employee of Canadian startups like Wattpad and Wealthsimple. Below, she explains how she went from showcasing crafts to digitizing Canadian health care into the 21st century.

Q: What did The Handy Company teach you about business?

A: The concept that you could create the market for something.

I was like, “We’re just stapling together pieces of paper, why would anyone want to pay for it?” But then to see people pay for it was a super interesting revelation, as a seven-year-old.

Q: What was the hardest thing you had to do for that project?

A: I don’t know that I’m a naturally-born sales person. I used to be quite shy. But once I got [the buyer’s] attention, it was okay, because I would demonstrate. If it was earrings I’d explain how to wear them. If it was the turtle game, I would set it up and show it to them.

A: They were like little turtles that you could make by folding paper. You would put them on top of an upside-down show box and then you would tap the shoebox to make the turtles fight.

Q: How did that project inform what came next for you?

A: I had it in my mind that if you learn something and you’re good at it, other people can pay you for the service.

When I was 10, I got into programming. Then at 12, I formed by own company around it.

We had a course in school called Information Technology. We learned basic HTML and CSS, and I thought it was phenomenal. You could write something and that would make a computer do something. It’s just such a great concept.

I got kind of bored of the stuff we were learning. My teacher said if I did all the course work, I could take the time to do whatever I wanted. And so I did. I started making multi-page websites for people.

This was 2001. The web was there and it’s doing stuff, but all the businesses in Saudi [Arabia] weren’t on it. All of my dad’s friends owned businesses, and he said if you want, you can make their websites.

I did that for a long time, right up until I left for school.

Q: What’s your advice to young people who want to create their own opportunities?

A: Learn to ask for what you want. If you find an organization that you want to be a part of, and they’re not advertising something that perfectly fits your skillset, feel free to ask for one that you think would be of high value to the company that you can deliver on.

And don’t be afraid to have side hustles that capture your imagination in different ways. Not many people have the freedom or the ability, or frankly the finances, to simply quit their job and do something they love that isn’t making any money. So having a job that isn’t the best or isn’t engaging you fully, but then having a side project that does or fulfils some of that, that’s okay.

You can have small side hustles that remain projects for a long time before they start turning a profit. Don’t be afraid of that.

This interview has been condensed and edited for clarity.