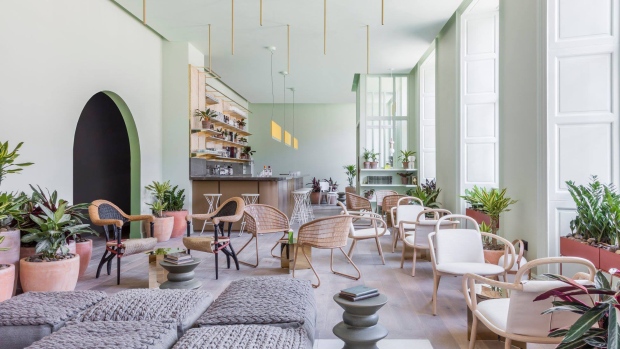 It’s one of the most divisive questions for road warriors: hotel or Airbnb?

Don’t agonize over your answer. Thanks to a new, hybrid concept that’s taking the hospitality world by storm, it’s possible to get the best of both worlds. Meet the boutique apart-hotel. It’s half-apartment, half-hotel, but 100 percent ready for your Instagram feed.

These kinds of accommodations generally bring to mind the budget-driven, ultra-generic extended-stay hotel typified by Homewood Suites or Residence Inn or sterile corporate housing. But this isn’t that: Boutique apart-hotels are geared toward project-based travelers who’d typically book shorter stays at stylish boltholes such as Hoxton or Soho House.

At such properties, you’ll get three times the square footage, functional kitchenettes, and comfortable living spaces, plus contemporary design throughout—all for the same T&E-approved price as that of a mid-range hotel or an Airbnb down the street.

If Airbnb is the biggest threat for most hoteliers—due to its value, perceived authenticity, and scale—apart-hotel owners say the opposite. “Airbnb is the best thing that could have happened to us,” says Eric Jafari, who introduced the concept in the United Kingdom with his budding brand, Locke. Larry Korman, president of U.S.-based apart-hotel brand AKA agrees. “Airbnb opened up this idea that there could be some advantages to a residence versus a room,” he says.

“Travelers love flexibility,” adds Korman. And so do investors. In February, Locke, a mere 16 months into its existence and just two hotels to its name, was purchased by Brookfield Capital for an industry-setting purchase price of £430 million (US$565 million), including real estate assets and a 900-room pipeline. Jafari estimates the company will be worth as much as US$2.5 billion by 2023.

“Over time, major hotel companies will be pivoting towards this opportunity,” says Steve Kent, business professor at Molloy College in Rockville Centre, N.Y., and the founder of Goldman Sachs’s hospitality investment group. “It’s aligned with both consumer and developer interests, and [hotel operators] are very quick to evolve and embrace what both of those constituents desire.”

“The reality of an Airbnb rarely reflects the images [of the listings],” says Locke’s Jafari. “There’s no gym. The blackout blinds suck. You show up at 10 a.m. and can’t check in until 3, but there’s nowhere to leave your luggage.”

And yet, he says, the apart-hotel sector is very under-represented, even in such large cities as London. He said that when he started baking his concept in 2010, “you could have increased the number of extended-stay hotels fourfold and still have been undersupplied.”

Fast-forward to October 2016, when his inaugural hotel, Leman Locke, opened in East London. Guests could leave their luggage with the receptionist while they waited for housekeeping to finish tidying their Scandinavian-style “Locke dream beds” and glossy white kitchenettes. In the lobby, they could plug in laptops and sip coffee from the in-house Hyde café or sign up for the hotel’s 5K running club.

For AKA’s Korman, consistency, privacy, and security are the keys to outperforming Airbnb. His hotels are located in cities from New York to Los Angeles and Washington and cater to the creative class, whether on business or not. “The movie and entertainment industry was attracted to us since the early 2000s because they wanted space to bring people back to watch dailies—along with privacy and anonymity,” he explains regarding the company’s early adopters. “I say the angels are in the details, and that’s where Airbnb has its Achilles heel,” he jokes.

Apart-hotel customers range from families temporarily displaced by a health-care emergency to those going through a separation or renovating their home. At AKA, they also include Tina Fey and the cast of her Broadway show, who stayed in the Washington property while workshopping Mean Girls’ transition from film to stage. They’ve housed child actors for Disney and Netflix, as well as a handful of basketball players in West Hollywood.

The premise is gaining wider traction. The most recent report from hospitality data insights company STR, published in July 2016, showed that 46.5 per cent of Airbnb guests were booking “long-term stays” of seven nights or more. And while only 9 per cent of hotel bookings in the U.S. were attributed to extended-stay brands, these hotels showed a 5 per cent growth in the same period.

Jo Layton is the managing director of the Apartment Service, an alliance for apart-hotel brands that also acts as a booking agency for 1 million serviced apartments. On a recent call from her Wimbledon, London, headquarters, she told Bloomberg that the sector has traditionally focused on the B2B market. Historically, 95 per cent of her site’s inventory has been exclusively bookable via a special portal for travel managers and corporate agents, who largely serve Fortune 500 companies with multi-month project and relocation needs.

Now, she says, apart-hotels are being designed for shorter stays of five to 28 nights. “It’s longer than the typical hotel stay but just shy of the corporate housing window.” They’re also bookable online, just like normal hotels.

Shai Zelering, managing director of hospitality at Brookfield Capital, chalks that up to the emergence of the digital nomad. Speaking to Bloomberg from his office in Washington, he cites a McKinsey study showing that the global workforce will be 75 per cent millennial within eight years—and that 71 per cent of these young employees expect global assignments during the course of their careers. “Companies are starting to see global experiences as an essential part of career and talent development,” he adds.

“A lot of the hotel sector is talking about millennials,” adds Locke’s Jafari, “but our demographic is bound together by the fact that they’re urbanites, not by their age.”

Milennial or otherwise, these global nomads share a desire to make their own protein smoothies for breakfast and stream Netflix before sleeping. Room service? Concierges? Turndown service? They can go out the window.

Brookfield’s Zelering says that industry-wide, “hotels run margins of 20 to 40 per cent. Apart-hotels run higher—probably 50 to 60 per cent margins.”

Overhead and labor aren’t the only cost savings. Residential neighborhoods make for cheaper real estate. And Molloy professor Kent adds that “everything from smaller check-in areas, less conference and meeting space, and restaurants that can be leased-out helps profitability.” Throw in weeks-long reservations that keep occupancy rates at close to 100 percent, and it’s clear why investors are biting.

Where to Find Them

Locke Hotels’ pipeline includes 22 projects in the next few years, including locations in Dublin, Paris, and Berlin. “The intention is to cover every major European city and get the company to US$2 or US$2.5 billion [in valuation]—then we’ll look at the U.S. and Australasia markets,” says Jafari.

AKA, meanwhile, intends to grow from 12 to 36 properties in the next five years, covering Paris, Rome, Austin, Miami, Chicago—and even such “cool cities” as Prague and San Sebastian.

Other competitors are sprouting up. In Amsterdam, the first Zoku hotel has opened with 133 loft-like rooms and modular furnishings. Wilde, a design-focused offshoot from the U.K.’s largest apart-hotel operator, launched in March; its first property is in London, with another coming soon in Edinburgh. Prominently, WeWork has jumped into the space with its residence-focused spinoff, WeLive, now in New York and Washington. And Native, a company purchased by Starwood Capital in 2015, now has 15 apart-hotels scattered throughout London, with locations coming soon in Glasgow and Manchester.

“Locke won’t ever reach the US$31 billion valuation of Airbnb,” says Brookfield’s Zelering. “But that’s not the intent.” The intent, he says, is to meet the very real needs of a very new segment of the travel population—before anyone else beats the company to it.