The freedom to dabble in financial markets is a luxury few can afford in times like these, with the virus crisis unleashing a crippling recession, soaring unemployment and a rise in mortality.

Some who have this freedom seem eager to fritter it away on complex and costly bets on an eventual oil price recovery, which, so far, have been an excellent way to part punters from their cash. Handling a barrel of crude is risky and dangerous work, but so is trading on its price from home.

One of the most popular and simple ways for retail investors to bet on oil is to invest in United States Oil Fund LP, an optically cheap and liquid exchange-traded fund that doesn’t require any expert knowledge or ability to store barrels of oil — just having a brokerage account is enough.

The fund does the hard work of buying U.S. benchmark oil futures contracts and rolling them over monthly before they expire.

All investors have to do is decide when to get in on the opportunity. With half of the world in lockdown, and no cars in the streets, betting on oil may have seemed like a no-brainer: An estimated US$1.6 billion flowed into USO last week.

It’s doubtful whether many of those investors could have guessed what was coming next: A crash in West Texas Intermediate crude futures for May delivery to below US$0, precipitated by the global oil glut meeting a lack of available space to store it all.

If even the experts were stunned by the revelation that zero was no longer the worst possible outcome, it’s hard to believe recent arrivals to the USO ETF had a clue.

One such investor, evidently still hoping for a turnaround, told the Wall Street Journal: “I’m either going to get my ass handed to me, or I’m going to be really smart.” Only an estimated 13 per cent of the fund was held by traders betting on a fall in the price, according to S3 Partners.

Even more remarkably, the fund’s sheer size and wide availability became self-defeating: USO had accumulated one-fifth of all outstanding May futures contracts in recent weeks. When it rolled over its position into June contracts last week, it only served to exacerbate the market slide.

This isn’t just about one ETF — there are plenty of ways for investors to lose money on oil. Online broker Interactive Brokers said on Tuesday that “several” of its customers’ losses on crude futures had decimated their accounts.

Earlier this month trading platform CMC Markets Plc’s chief executive officer, Peter Cruddas, pointed to the trend: “Normally (customers) trade shares and indices but there has been a big focus on oil lately.”

But it’s the size, structure and stock-like trading that makes commodity ETFs like USO so problematic. The fact that the fund is now changing how it functions — due to “ongoing extraordinary market conditions” it may invest in any monthly contract available, or in varying percentages of them — should be of no comfort to wannabe oil traders. 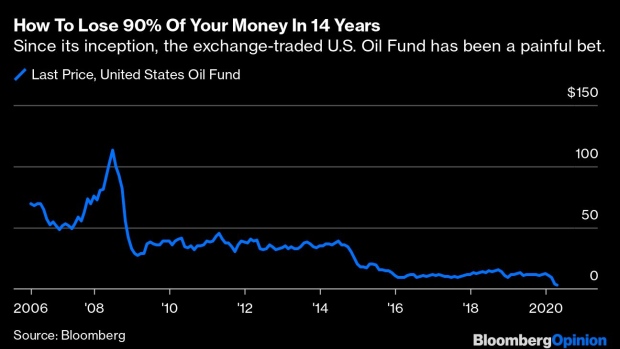 A change to strategy on the fly may be helpful for an immediate market dislocation, but it’s not good for transparency and it doesn’t preclude future price plunges if the oversupply of oil persists. “The same drop we’ve just seen could happen again,” says Ole Hansen, a commodities strategist at Saxo Bank.

More information and more health warnings for investors would be good. But many are already out there, and have been summarily ignored. Eric Balchunas, of Bloomberg Intelligence, warned in 2016 that USO was a “disaster waiting to happen” for novice traders who didn’t understand how the hidden costs of rolling a futures contract from one month to the next could hurt.

Even in the good times, it’s a pricey proposition: That year, the spot price of oil rose 45 per cent, yet USO rose just 6 per cent. Any investor willing to dig into the archives would see that the fund’s cumulative losses since its inception in 2006 came to 93.7 per cent at end-March, according to ETF company USCF. Greed can often dismiss signals as noise.

Until those warnings get louder, expect people to keep flocking to brokerage platforms on the hope big gains are right around the corner. The volatility is good news for brokers’ trading commissions: CMC Markets expects net trading revenue to double for the year ended March 31.

Maybe it’s brokerage profits — CMC’s share price is up 41 per cent in one month — that will be the lucrative flip side of oil’s finger-burning collapse.