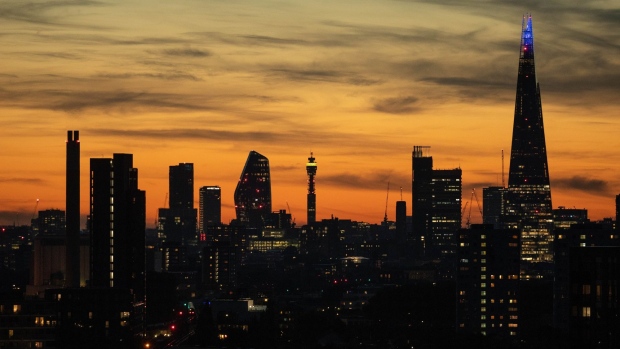 Skyscrapers stand illuminated on the skyline as the sun sets in London, U.K., on Thursday, July 30, 2020. , Bloomberg

Fifty-five firms have committed to a framework released Thursday for setting climate goals specific to mortgages, bonds and other asset classes in their portfolios, said the Science Based Targets initiative, a consortium that developed the framework.

The SBTi has been helping companies figure out how they should change their operations, such as energy usage in factories and offices, to align with the 2015 Paris climate agreement, which asks countries to aim to limit Earth’s temperature increase to no more than 1.5 degrees Celsius (2.7 degrees Fahrenheit). The consortium is now zeroing in on how financial firms should change their lending and investing activities.

Under the SBTi framework released Thursday, firms would set goals such as adjusting their mortgage financing to reduce emissions per square meter or changing electricity-generation project financing to cut emissions per kilowatt-hour. Starting Thursday, firms have two years once they commit to have their targets validated by SBTi, which would assess whether the targets are aligned with the Paris climate agreement.

“There are a number of high-level commitments out there that financial institutions are making,” said Cynthia Cummis, head of private-sector climate work at World Resources Institute, one of the research groups behind SBTi.

Morgan Stanley, for example, said last week it would eliminate the net carbon emissions generated by its financing activities by 2050.

Environmental non-governmental organizations see the “financial sector as a laggard on climate action, and would like them to be a lot more transparent on what their impact is on the climate,” Cummis said in a phone interview. “We provide a structure or framework for financial institutions to show that they’re actually making progress against high-level commitments.”

Some environmental NGOs expressed disappointment that the framework recommends but doesn’t require that firms phase out financing of coal companies and doesn’t mandate that they stop backing fossil-fuel expansion projects.

The framework “is the result of much thoughtful work, but it has disappointingly failed to live up to its full potential to help de-carbonize finance at the rapid speed that science requires,” Patrick McCully, climate and energy director at the Rainforest Action Network, said in a statement.

The SBTi sees divestment as one of several options that firms can pursue to reduce the climate impact of their portfolios, said Nate Aden, a senior associate at World Resources Institute who led the framework’s development. The SBTi sought feedback from firms and developed the framework with the intention of balancing ambition with feasibility, he said.

--With assistance from Eric Roston and Saijel Kishan.