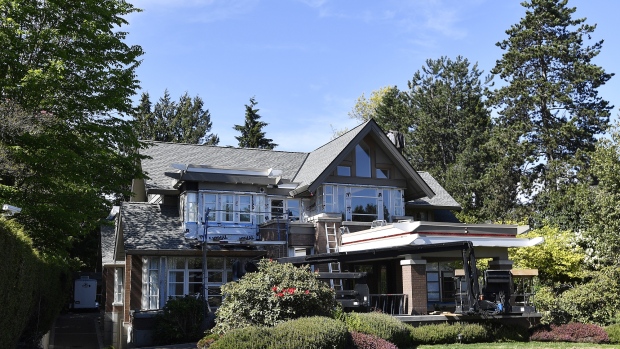 A home belonging to Huawei Technologies Co. Chief Financial Officer Meng Wanzhou stands in Vancouver, British Columbia, Canada, on Wednesday, May 8, 2019. The court approved Meng's petition Wednesday to modify her bail terms, which included a request to move from her $5 million, six-bedroom residence near a park to an estate more than triple the size in one of Vancouver's toniest neighborhoods. , Jennifer Gauthier/Bloomberg

Huawei Technologies Co.’s chief financial officer may still be under house arrest in Canada but she’s on the move -- to her newly renovated $13 million mansion.

The Supreme Court of British Columbia approved Meng Wanzhou’s petition Wednesday to modify her bail terms, which included a request to move from her $5 million, six-bedroom residence near a park, to an estate more than triple the size in one of Vancouver’s toniest neighborhoods. She’ll be just two doors down from the U.S. consul general’s residence, where the star-spangled banner flaps on the front lawn.

“The existing home is a corner lot, exposed on three sides, there isn’t clarity between public and private portions,” one of Meng’s defense lawyers, David Martin, told the court. “Currently, large numbers of people go there, sometimes approach the house.”

Such nuisances would be minimized with the move. The new home in the Shaughnessy neighborhood is larger and enclosed, allowing her paid bail monitors “to carry out their duties more effectively and fully within the gated property,” Martin said. Meng plans to relocate on Saturday, according to an affidavit filed by her bail monitor.

Meng’s bail conditions, which allow her to freely roam a 100-square-mile (62-square kilometer) patch of Vancouver as long as she’s accompanied by her monitors, contrasts starkly with that of two Canadians detained by China on national security grounds shortly after her arrest.

Michael Kovrig and Michael Spavor will soon mark five months in secret jails, where they’ve had just a handful of consular visits combined. China accuses Kovrig, a former Canadian diplomat, of spying and Spavor, a North Korea travel guide, of supplying him with intelligence. They’ve been held in isolation and questioned multiple times a day in cells where the lights can’t be turned off.

Meng was in court Wednesday as her lawyers laid out their strategy for her defense, arguing that her constitutional rights were violated when she was detained for three hours at the Vancouver airport before her arrest at the request of U.S. authorities. They also plan to question "double criminality," disputing that what the U.S. alleges she did -- lied to banks to trick them into conducting transactions for Huawei that may have violated U.S. sanctions -- constitutes a crime in Canada.

Her next scheduled court appearance is Sept. 23.