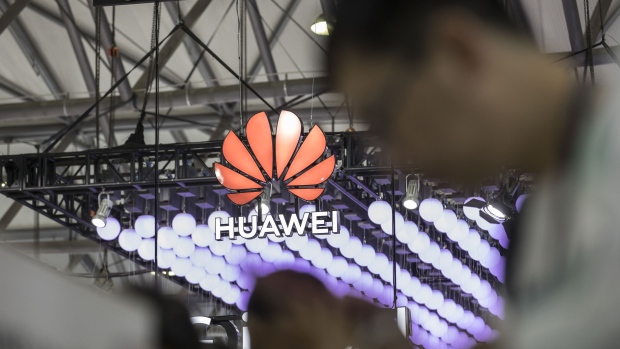 Signage is displayed at the Huawei Technologies Co. booth at the MWC Shanghai exhibition in Shanghai, China, on Thursday, June 27, 2019. The Shanghai event is modeled after a bigger annual industry show in Barcelona. , Bloomberg

(Bloomberg) -- Huawei Technologies Co., after having practically shut down its Washington operation, last month added a trio of well-connected lobbyists to a swelling corps of influencers.

It has sent executives to schmooze journalists and even started using Twitter to persuade the Trump administration not to ruin its business.

But it may be an unwinnable fight.

“Huawei is mistrusted by intelligence community careerists, congressional Democrats and Republicans, and many (but not all) American tech companies,” Bruce Mehlman, former assistant secretary of commerce for technology policy, said in an email. “They have a much larger problem than just the Trump administration.”

The White House has been pushing allies to cut ties with the Chinese company over allegations its networking gear poses an espionage risk. The campaign has had mixed success but Vice President Mike Pence last week urged Iceland not to use Huawei gear and recently signed a security agreement with Poland that could block the company from the Eastern European nation.

The company isn’t giving up trying to win friends and influence people in Washington. In March, it registered Washington lobbyists with Congress for the first time since 2012. Those hired include Samir Jain, a Jones Day partner who was a cybersecurity official under Democratic President Barack Obama.

Huawei also has engaged the law firms Sidley Austin LLP and Steptoe & Johnson, and Michael Esposito, who on his firm’s website is described as part of the senior leadership of the Republican National Committee.

On Aug. 30, three lobbyists from Squire Patton Boggs registered to work for Huawei. They include Edward Newberry, who once was deemed a “King of K Street” in a New York Times article, according to the law firm. Jack Deschauer, a former director of Senate affairs for the secretary of defense and Jeff Turner, an expert on U.S. scrutiny of foreign companies, also registered. None of the three returned a telephone call seeking comment.

Racepoint, with a two-year agreement signed in September 2018, is to provide “ongoing public relations support” including advice on strategy and social media, according to a foreign-agent disclosure filing with the Justice Department. Racepoint won’t have direct contact with government officials, the firm said in the filing.

BCW in March registered its agreement to provide advice to Huawei, with a budget not to exceed $160,000 and work to include media outreach and opinion research “to be billed at crisis rates,” according to the filing. In an August filing, BCW said its relation with Huawei had ended. Catherine Sullivan, a BCW spokeswoman, declined to take questions about the relationship.

Huawei has deployed Tim Danks, a vice president with the company since 2009, and Andy Purdy, its chief U.S. security officer in the U.S. Purdy joined Huawei in 2012. Earlier he helped establish the Department of Homeland Security’s cybersecurity office and served as its leader for two years ending in 2006.

“We’d like to engage,” Danks said in an interview with Bloomberg reporters and editors. “The U.S. government hasn’t been very forthcoming.”

In a Bloomberg TV interview Aug. 29, Danks said, “We believe that there is a way forward. We’re hoping that with further engagement with the U.S. government that we’ll be able to find a solution to the current situation.”

Days after Danks spoke, Trump renewed his criticism of Huawei, calling it “a big concern of our military, of our intelligence agencies.” Earlier his administration had moved to bar the gearmaker from American markets and deny it key U.S. parts. U.S. officials say Huawei gear could be used for spying by Beijing -- an allegation rejected by the company.

“The administration has pretty much made is position clear,” said James Lewis, director of the technology policy program at the Center for Strategic & International Studies in Washington. “How are you going to to talk them out of that?”

As the company has become a focal point for U.S.-Chinese tensions, some have regarded it as bargaining chip in sensitive trade negotiations. China and the U.S. on Sept. 5 announced that face-to-face negotiations aimed at ending their tariff war will be held in Washington in the coming weeks, amid skepticism on both sides that progress can be made.

Even as Danks and Purdy propose ways to end the standoff with the U.S., Huawei elsewhere has veered to defiance. The company in a tweet last week cast his visit as part of a political agenda that will disrupt Europe’s adoption of fast 5G mobile technology, and cited “U.S. pressure against China and Huawei.”

The crisis may be deepening: Google confirmed the upcoming Huawei flagship smartphone won’t have licensed Google apps, a minus for consumers wanting access to the search giant’s proprietary maps and other features. Sales outside China could be slashed in half, Bloomberg Intelligence analyst Charles Shum said in a Sept. 4 note. Huawei’s sales in China, where consumers have had no access to Google services since 2009, won’t be affected.

Danks and Purdy, the Huawei executives, in the Aug. 28 interview suggested that security concerns could be met by applying uniform standards to all companies involved in telecommunications networks.

Huawei executives reject the notion that the company may do the bidding of China’s spy agencies by relaying traffic that flows through its network gear. “We couldn’t comply. We don’t have access to that data,” Danks said.

The Trump administration has delayed implementation of its Huawei restrictions. Purdy said that if Huawei reaches an agreement with the administration, “We’re hoping we can continue to serve our small rural carriers.”

The company’s founder and chief executive officer, Ren Zhengfei, in an interview with the New York Times published Tuesday, proposed negotiations with the U.S.

Ren’s daughter, Meng Wanzhou, is in Canada awaiting extradition proceedings after her arrest last year at the behest of the U.S. government, on charges related to trade sanctions.

The Trump administration was right to move against Huawei, and shouldn’t ease restrictions as part of trade talks, billionaire investor George Soros said in a Sept. 9 opinion piece in the Wall Street Journal.

While the largest U.S. carriers have spurned Huawei gear over security concerns, smaller operators have purchased it, citing low prices and good reliability. Some of them cite a lack of public evidence pinpointing the alleged security risk, and suspect the entire dispute is tied to leverage in the trade talks.

“We’re kind of in the middle,” said Jim Kail, president of LHTC Broadband, which serves rural communities in Pennsylvania.

“We’re not going to jeopardize our national security just for a buck. But there’s no proof of it,” Kail said. “We’re going to continue using it until somebody tells us differently.”

The idea of a uniform standard echoes proposals from European countries that are loath to annoy China by singling out its leading technology company, said Lewis, of the Center for Strategic & International Studies in Washington.

Equipment from the Shenzhen-based company is not secure, in part because equipment can take in software updates that create vulnerabilities, even after being judged to be benign when installed, Lewis said.

The Huawei executives said it’s a “misconception” to think that complex networks can be manipulated remotely.

To contact the reporter on this story: Todd Shields in Washington at tshields3@bloomberg.net