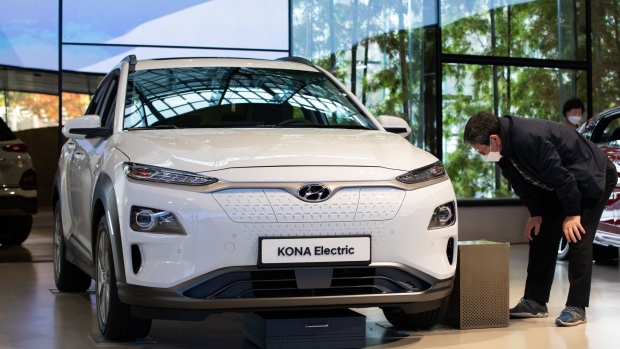 Hyundai Motor Co. will recall about 82,000 electric cars globally and take an almost US$900 million hit after the South Korean government found defects in some of the vehicles’ battery cells.

The recall will be for EV models of the Kona, as well as the Ioniq and the company’s Elec City buses, that were manufactured between November 2017 and March 2020, Hyundai Motor said in a statement. The cells were made by LG Energy Solution Co. in a factory in China.

The replacement of the battery system is expected to cost about 1 trillion won (US$899 million), a charge that will be reflected in the automaker’s fourth-quarter earnings. South Korea’s transport ministry said Wednesday that initial findings of an investigation into the matter showed a Kona EV caught fire because of a problem with the battery cell, which was manufactured at LG Energy’s Nanjing plant.

Wednesday’s recall, which expands upon an earlier claw back of Hyundai Konas in October, comes at an awkward time for group. Earlier this month, Hyundai and its affiliate Kia Motors Corp. were forced in separate exchange filings to say they weren’t in any talks with Apple Inc. to develop its self-driving electric car, backing away from an earlier Hyundai statement that said they were in discussions.

Hyundai also in the middle of a big marketing campaign for its Ioniq 5, the first battery-electric car from its dedicated EV brand. The company plans to sell 70,000 of the vehicles built on its EV dedicated platform this year and 100,000 units in 2022, President Jaehoon Chang said earlier this week.

Some 16 cases of Kona EVs catching fire have been reported globally, including in Canada and Australia in 2019, according to Yonhap News. One of the incidents took place in the South Korean city of Daegu, where a Kona vehicle parked in an underground lot imploded.

Hyundai Motor will initially reflect the cost of the recall and depending on talks with LG Energy, some of that could be recovered, the automaker said. In January, Hyundai Motor reported an operating profit of 1.64 trillion won for the three months ended Dec. 31.

LG Energy will work closely with Hyundai Motor on the recall, it said in a separate statement. LG also said that the issues the transport ministry mentioned regarding its batteries were problems caused when the plant initially went into production and have since been improved. LG will also step up safety protocols around its manufacturing and quality-check processes.

South Korea’s transport ministry also plans to come up with measures to improve regulations to ensure the battery cells’ safety by the end of March after completing its investigation.