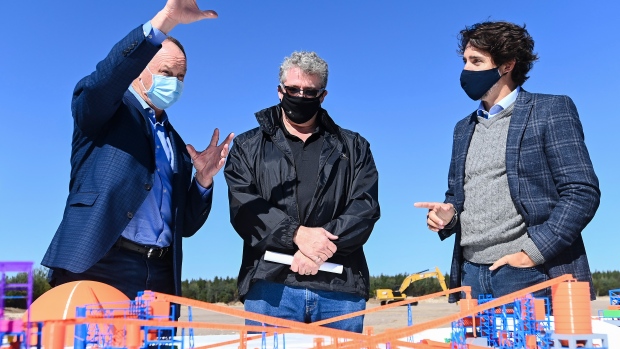 Canadian Prime Minister Justin Trudeau, right, listens with Gordon Stothart, President and CEO of Iamgold, centre, as they over look a mock up model at a ground breaking event at the Iamgold Cote Gold mining site in Gogama, Ont., on Friday, September 11, 2020. , THE CANADIAN PRESS/Nathan Denette

Iamgold Corp.'s board of directors is searching for a new chief executive officer after the miner announced the departure of its current leader.

Gordon Stothart stepped down from his duties as president and CEO with immediate effect, Iamgold said in a release Wednesday. He also resigned from the company's board of directors. No reason was given for his departure; the release indicated Stothart will serve in an advisory capacity to facilitate the transition.

“This is likely to come as a surprise to the market given the company is mid-way through the large-scale construction of the Côté project. However, the company has struggled on the operating front over the past two years,” wrote TD Securities Analyst Steven Green in a report to clients.

To fill the void while the search for a successor is underway, Iamgold said Chief Financial Officer Daniella Dimitrov would serve as chief executive on an interim basis. She was also appointed president.

"On behalf of the entire board of directors, I thank Gord for his years of service to Iamgold and wish him the very best in the future," said Iamgold Chair Don Charter in a release.

Charter also credited Stothart for "championing" Iamgold's Côté Gold project in Ontario. In a separate release Wednesday, the company said that project -- which is a joint venture with Sumitomo Metal Mining Co. -- is 43.4 per cent complete and still on track to begin production in the second half of next year.