International Business Machines Corp. reported revenue that missed analysts’ estimates, highlighting the challenge of fulfilling its pledge to return to growth this year as it prepares to spin off its low-growth legacy computer services unit. The shares dropped in extended trading.

Sales rose 0.3 per cent to US$17.6 billion in the three months ending Sept. 30, the Armonk, New York-based technology company said Wednesday in a statement. Analysts were expecting US$17.8 billion, on average, according to data compiled by Bloomberg. The underwhelming performance also comes after a more optimistic second quarter, when the company reported its biggest increase in revenue in three years. This time, weak sales in IBM’s legacy IT management and systems units outweighed robust demand for cloud computing, where the company is pinning its hopes for a turnaround.

“We continue to make progress but we have more work to do,” Chief Financial Officer Jim Kavanaugh said in an interview. “The fourth quarter is going to be a major transition to the new IBM.”

The Global Technology Services segment posted a 4.8 per cent decline in sales from a year earlier. The division, which includes infrastructure service operations like managing client data centers and traditional information-technology support, comprises about a third of IBM’s total revenue. A large portion of the unit will be spun out Nov. 3 into a new company called Kyndryl. IBM said that excluding Kyndryl, revenue would have been up 2.5 per cent in the third quarter.

Kavanaugh said that the weakness in GTS was “not unexpected,” with clients “pausing to re-evaluate” amid the impending spinoff.

The separation will cap IBM’s fourth major transformation and cement its pivot away from slower-growth mainframe computing and IT services. Even before taking over from Ginni Rometty in April 2020, Chief Executive Officer Arvind Krishna was a key architect of IBM’s hybrid-cloud strategy, which lets clients store data in private servers and public clouds, and oversaw the US$33 billion acquisition of Red Hat. Since then, Krishna has worked to modernize Big Blue and revive growth by shifting into the faster-growing and higher-margin cloud services dominated by Microsoft Corp. and Amazon.com Inc., and artificial intelligence. 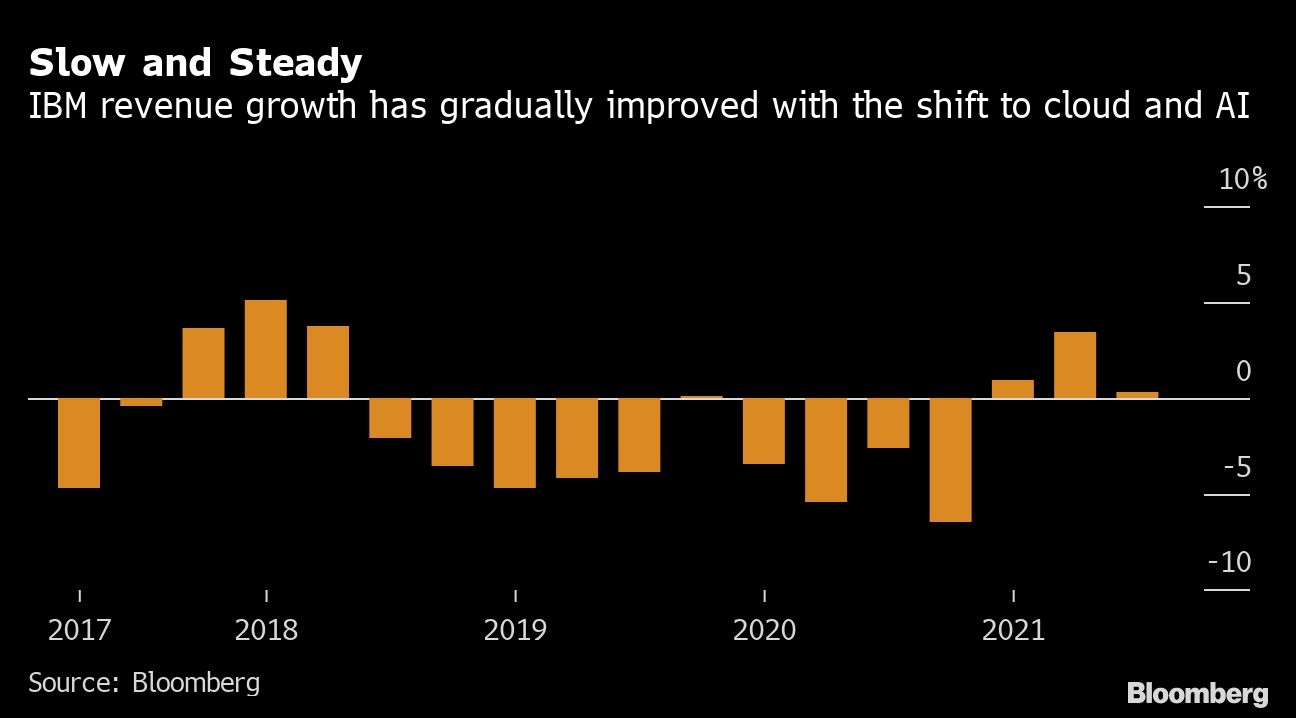 IBM reported revenue rose 2.5 per cent in its Cloud and Cognitive Software division and 12 per cent in Global Business Services, which includes consulting. The company’s systems segment, which houses hardware and operating systems software, fell 12 per cent to US$1.1 billion, a function of nearing the end of the mainframe product cycle which is in its ninth quarter, Kavanaugh said.

Total cloud revenue over the last 12 months grew 14 per cent to US$27.8 billion with Red Hat sales increasing 17 per cent during the quarter.

Earnings excluding some costs were US$2.52 a share, falling short of the average analyst estimate of US$2.53. Gross margin was 48 per cent, down 1 per cent from a year ago and less than the 49.6 per cent analysts expected.

IBM shares have gained 13 per cent this year through the close of trading Wednesday, lagging the 21 per cent gain in the S&P 500 Index.