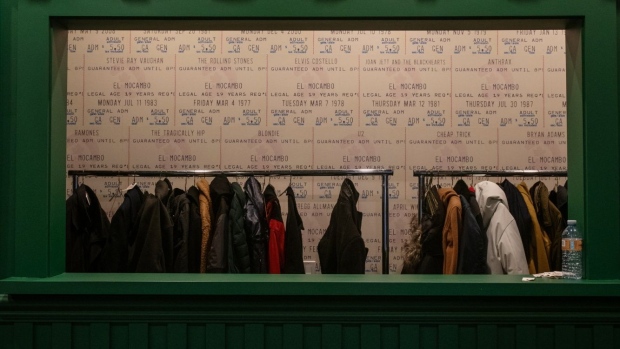 (Bloomberg) -- With his peacock’s flair and knack for attracting controversy, Michael Wekerle sticks out in Toronto’s unpretentious financial circles. But the former star Bay Street trader looks comfortably in his element as he shows off his latest project: the newly renovated El Mocambo.

Breezing around the iconic bar during a pre-opening media event, Wekerle exudes an aging rock-star vibe, dressed in a windowpane-checked navy suit, vintage rectangular Ray-Bans, and a side-feathered hat reminiscent of Dylan circa 1975. Then there are the tattoos. He lifts up his shirt to reveal a giant wolf on his stomach, inked when he was a thinner man. “It now looks like a f---in’ muskrat, eh?” he says with an infectious laugh.

“Wek,” as he’s known, has been a technology investor, business reality show judge, and real estate mogul. Now he’s invested C$30 million ($21.8 million)—“give or take a million”—to resurrect the legendary Toronto venue that shot to fame in 1977, when the Rolling Stones played a surprise two-night gig there, but has been shuttered since 2014.

“What I tried to do is take it back to its original form,” he says. “Make it cooler, make it better, make it more efficient, give it longevity.”

The latter involves an audacious attempt to retool the modern live-music venue experience. Aside from incorporating the essentials needed to draw music lovers physically into the “El Mo”—like smokin’ hot sound, excellent sightlines, and classy, photo-ready decor—Wekerle has been thinking outside the box, literally. The revamped venue has been set up to allow shows to be livestreamed in near-real time, while viewers can gain access to interact with performers on stage and off.

To allow that to happen, the El Mo was gutted to the outside walls, says Jamie Howieson, the venue’s executive designer and production manager. Four kilometers (2.5 miles) of cables for sound, lighting, video, and the internet have been hidden behind the tropical and rock ‘n’ roll motifs. The building incorporates state-of-the-art recording and broadcast facilities that will allow anything that happens in the El Mo, including backstage or in dressing rooms, to be livestreamed or packaged on the premises.

“It’s not a club,” Howieson says. “It’s a content factory for the world.”

Powering the interactivity is second-party platform CYA Live (pronounced “See ya live”), which lets people tune in to an event, for free or for a fee, and video chat with performers  or other fans. Wekerle first heard of the company in 2015 when he was a judge on Dragons’ Den, the Canadian equivalent of Shark Tank. The pitch from Sami Siddique, the founder and chief executive officer, so impressed Wekerle that he became a primary investor.

“One way to look at it is that broadcast so far has been one way,” Siddique says. “What we have done is made that two-way—and multiway—in the sense that you can choose anyone from the audience and let them be part of the experience.” He says CYA Live also is lightning fast, with a “latency,” or lag time, of 250 milliseconds, compared with full seconds for many other services. It can also push content to Facebook, YouTube Live, and other platforms.

The livestreaming industry is on a relentless climb. The number of hours watched surged 12%, to 1.19 billion, in December from a year earlier, according to a report published by streaming-tools provider StreamElements and data platform Arsenal.gg. The coronavirus outbreak, which has confined a growing number of people to their homes this year, should boost the rise. (During the initial outbreak, one Beijing club livestreamed a five-hour DJ set and received 2 million yuan ($285,000) in tips from viewers.)

“Incorporating audience interaction in shows is a novel innovation,” Macklin said via email of the El Mocambo endeavor. “[It’s] one of the very few venues that are investing in not only broadcasting live entertainment but adding interaction with those viewers.”

The El Mocambo Tavern got its start as a restaurant and dance hall in 1948 and went through various incarnations, including a music venue catering to the city’s Hungarian community, according to the former Torontoist news site. By the ’70s, new owners veered into rock and R&B, eventually attracting the Stones, who were looking to prove they could still “cut it at the club level,” according the 1997 book Rock and Roll Toronto: From Alanis to Zeppelin.

The band’s surprise appearance in March 1977 (listed as “The Cockroaches”) cemented El Mo’s reputation among marquee clubs such as New York’s CBGB and the Roxy in Los Angeles. The shows’ recordings were culled to form the basis of the beloved third side of the double-album Love You Live, while the night itself made for eyebrow-raising tabloid fodder: Margaret Trudeau, wife of the then prime minster of Canada, attended the concerts and hung out with the band at its hotel; she had secretly separated from her husband the morning of the first show.

After that, it became a sought-after stop in North America. Blondie, the Ramones, and U2 all played the El Mo. A high-energy recording of an Elvis Costello concert in 1978—when he cheekily announced to the Canadian audience “We come here from England to ask for the country back”—was heavily bootlegged and eventually released commercially in 1993 as Live at the El Mocambo, one of several albums by various artists to be so named. Wekerle himself remembers going to the club several times as a young man, including once when he was caught after sneaking into a Stevie Ray Vaughan concert because he couldn’t easily afford the C$20 ticket.

Slated to reopen as early as April 1, success here would put a new feather into the cap of Wekerle, 56, who gained his street cred as a trader at GMP Capital Inc. from 1995 to 2011. He helped build the non-bank brokerage into Canada’s second-biggest by generating millions trading oil and mining stocks. He was involved in taking Research In Motion (later renamed BlackBerry Ltd.) public in the late ’90s—and personally invested in the company’s buildings in Waterloo, Ontario, years later after the smartphone pioneer fell on hard times.

Not everything Wekerle touched has been a smashing success. A foray into backing technology startups at Difference Capital Financial Inc. had mixed successes before it merged with a fintech firm it once backed. Following the death of Wekerle’s wife in March 2010, an incident in an Arkansas hotel later that year led to a lawsuit that included allegations he had injured a valet and licked a woman’s foot; Wekerle says he probably drank too much. (The parties settled and the case was dismissed.) In 2014, his new Porsche 918 Spyder hybrid burst into flames while he was filling up at a gas station.

Meanwhile, the El Mocambo had fallen on hard times as the economics of live entertainment changed: Record companies, which had financed tours in the club’s heyday, pulled back as their industry shrank, and clubs, hit by rising rents, found it difficult to generate enough profit from traditional streams of booze, food, and tickets sales.

Sam Grosso, El Mo’s co-owner from 2012 to 2014, says the club had been neglected for years. Instead of paying for a “massive” renovation, he had decided to sell the business and donate the landmark “neon palms” sign to the city. One Halloween, Wekerle surprised him with a call.

“He was really adamant” that he wanted the sign, Grosso recalls. “I said, ‘If you want to buy it, I’ll make you a deal. I’ll sell you the building and the business, and I’ll throw the sign in for free.’” For his part, Wekerle recalls making a quick decision to purchase after inspecting the club. “I see a Bud Light there, so I took a Bud Light,” he says, making the sound of a beer being opened. “I think about it, and I go, ‘Alright, I’ll buy it.’ That’s as simple as it was.”

“It’s not a club. It’s a content factory for the world.”

Wekerle says he originally thought the whole investment would cost him C$12.5 million. Unfortunately, “it got a little bit away from me,” he says more than six years later, sitting in the club’s immaculate new dressing room, a glass of white wine in his hand. “I didn’t want to skimp on it, you know, I didn’t want to do it 80%.”

Among issues Wekerle’s team discovered during the renovations was damage from three separate fires over the club’s checkered history, meaning that all the wood had to be removed. To pull profit out of adversity, some of the lumber that wasn’t damaged was sent to Fender Musical Instruments in Arizona to be used to make specialized “sunburst green” Stratocasters and Telecasters, Wekerle says.

The El Mocambo will initially have a capacity of 350 people in the downstairs room, plus 400 in the classier upstairs venue; a staircase emblazoned with names of some of the acts that have played there connects the two. Even though the stages will be able to run shows simultaneously, Wekerle admits that conventional sources such as tickets sales may generate only enough to pay salaries and a bit more.

“The real essence here is about streaming [and] content,” he says.

It may also be challenging to attract certain bands, given exclusivity and licensing agreements that restrict where groups can play and what might be streamed. When it’s suggested that the Stones could make a grand return in June, amid concerts scheduled in nearby Buffalo and Cleveland, Wekerle—upbeat, as usual—offers measured optimism.“I’ve had my hopes set so high on starting this club up, but I’ve now learned that you just got to take it as it is,” says Wekerle, who has an “It is what it is” tattoo on his left bicep. “Don’t set your hopes up too high because disappointment sucks.”

--With assistance from Gerrit De Vynck.

To contact the author of this story: Steven Frank in Toronto at sfrank9@bloomberg.net

To contact the editor responsible for this story: Justin Ocean at jocean1@bloomberg.net, Jacqueline Thorpe