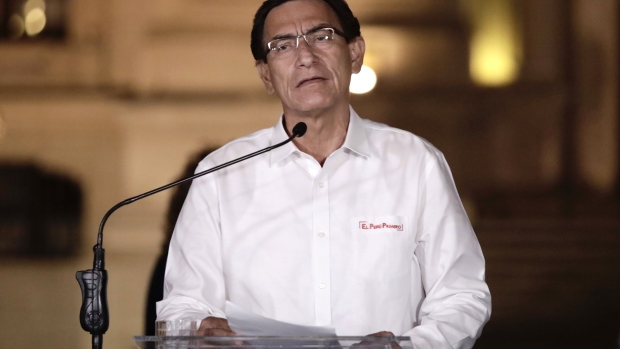 (Bloomberg) -- Even in Latin America, a region known for political instability, Peru stands out.

Every president elected in the last four decades has either been impeached, imprisoned or sought in criminal investigations.

On Wednesday, Pedro Castillo became the latest when his attempt to dissolve congress backfired and led to him being ousted hours later, and then detained as he tried to flee to the Mexican embassy. Prosecutors say he could face 10-20 years in jail.

He now finds himself detained in the same police base where former President Alberto Fujimori is being held. In 2019, former president Alan Garcia committed suicide as police arrived at his home.

Peru has had six presidents since the start of 2018, partly because the constitution makes it easier to oust a head of state than it is almost anywhere else. Of those six, two were elected, and four took over when someone else was driven out.

The unicameral congress of 130 lawmakers can impeach a president on the grounds of “permanent moral incapacity” if more than two-thirds of them back the motion.

Presidents rarely win a strong mandate from voters, and are often forced to try to rule without a solid coalition in congress. Graft is also pervasive, and four ex-presidents have been investigated over the Odebrecht scandal, after the Brazilian construction giant admitted to paying off leaders across Latin America.

Here’s a quick look back at some recent presidents who got into trouble:

Castillo triggered a crisis when he tried to preempt a third attempt to impeach him by dissolving congress and ruling by decree. Peru’s constitutional tribunal described the action as a coup, the army and police wanted no part of it and his ministers quit en masse. Congress overwhelmingly voted to get rid of him — even some members of his own party backed the motion — and he ended the day in police detention. Prosecutors now want a lengthy jail term for the alleged crime of rebellion. He was already under investigation on other charges, such as criminal conspiracy and influence peddling.

Prosecutors opened a probe into Merino over the deaths of two protesters during the violent repression of demonstrations against the ouster of Martin Vizcarra. Two university students were killed and dozens more were injured in protests in Lima on Nov. 15 to call for Merino’s resignation, which came the following day. Francisco Sagasti took over as caretaker president for about 8 months.

Prosecutors in 2020 began investigating allegations he took 2.3 million soles ($600,000) in bribes in exchange for helping construction firms win contracts when he was a regional governor, from 2011 to 2014. He survived one impeachment vote in September 2020, but was ousted by another two months later.

Kuczynski is one of the four Peruvian ex-presidents implicated the Odebrecht scandal. Prosecutors accused him of helping the firm win two infrastructure contracts while serving as a minister in the government of former president Alejandro Toledo. He survived an impeachment vote in 2017, but quit in 2018 on the eve of another one.

Prosecutors accused Humala and his wife of taking $3 million from Odebrecht to finance his successful 2011 presidential campaign, as well as laundering money during his failed 2006 bid. He was the country’s first former president to be indicted as part of the probe and is currently awaiting trial.

In Garcia’s case, prosecutors alleged he led a ring of corrupt officials during his second government, collecting bribes and helping Odebrecht win contracts that included a billion-dollar light-rail line. A court ordered his arrest in 2019, and he shot himself when police arrived at the door of his home in Lima.

U.S. Marshals arrested Toledo in July 2019 with $40,000 in cash in a suitcase. He was released from jail in 2020 after a judge ruled he was at risk of contracting coronavirus if he remained in custody. Prosecutors in Peru accused him of receiving as much as $30 million in bribes from Odebrecht.

Fujimori is currently serving a 25-year sentence for commanding the killing of alleged terrorist sympathizers and was also convicted on graft-related charges. He was pardoned by Kuczynski in 2017, but the decision was later overturned by the country’s supreme court.