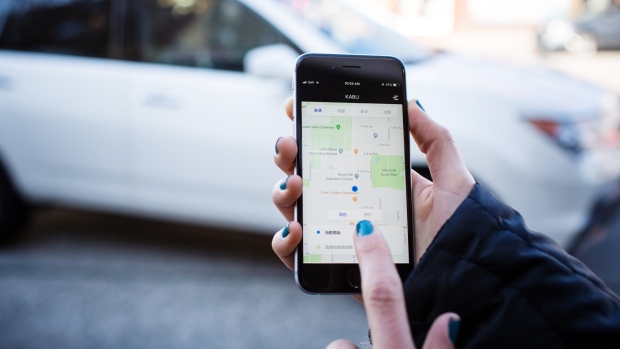 The white BMW luxury sedan glides up to a Taiwanese noodle shop in a Vancouver suburb, hailed courtesy of a Chinese-language app. The eight-minute ride in its spotless leather interior is smooth, cheap -- and utterly illicit.

Welcome to Vancouver, one of Uber’s most obstinate holdouts -- the largest North American metro region without legal ride sharing, where underground services for Chinese speakers is thriving.

Fleets of vehicles -- often fancy ones, at that -- ferry passengers around the city and its suburbs. But to access them, you need to navigate a Chinese app and preferably speak Mandarin or Cantonese so the drivers don’t think you’re a cop.

“Our goal isn’t the Chinese market -- of course we’d rather have a larger market, all Canadians," says Daniel Xiao, finance director at Gokabu Group, whose ride-hailing platform Kabu claims to hold an estimated 90 per cent share of the market and has an English service ready to go. Other services -- there have been as many as 18 at one point -- go by the names of Longmao and Udi Kuaiche.

British Columbia Premier John Horgan’s government passed legislation last fall that was supposed to pave the way for ride sharing this year -- seven years after Uber Technologies Inc. first tried to crack the Pacific Coast province. But the way the law is crafted, Uber fans -- and English speakers -- may have to wait longer for a broader rollout, if it ever happens at all.

“We know that people are frustrated and have been waiting far too long," Transportation Minister Claire Trevena said, as she announced the "milestone" legislation.

Maddening may be a more apt description. The legislation could allow the provincial Passenger Transportation Board to cap the number of vehicles, restrict the areas in which they can operate, and set the rates they can charge. In other words, to regulate ride sharing so that it looks more like the dysfunctional taxi industry it already oversees.

At present, a cab taking a passenger from one Vancouver suburb to another can’t pick up a customer on the return trip unless it’s also licensed in the drop zone. Getting licensed across the region of 2.5 million people would mean getting scarce, costly permits from 21 different municipalities. Vancouver International Airport restricts which taxis can operate at the terminal, with its own permits starting at $3,120  a year.

That balkanized governance structure has saddled metro Vancouver with a taxi nightmare. In summer months, when cruise ships dock at the harbor, flagging a cab downtown becomes next to impossible. Drivers facing little competition refuse rides that take them beyond their home zone or from customers wanting to pay by credit card. In early February, hundreds queued for cabs at the airport during a rare Vancouver snowstorm, including shivering children dressed in sandals after trips to warmer climes.

Two ride-sharing giants have already indicated they may just move on to more hospitable markets given the slew of regulations.

"We’ve never entered a market with all of those things in place," Joseph Okpaku, Lyft Inc.’s vice president of government relations, told lawmakers in the capital Victoria in January.

Uber, which is slated to join Lyft with an initial public offering this month, says the rules could "prohibit ride sharing through regulations," Michael van Hemmen, Uber’s business manager for Western Canada, said in an email.

Against that backdrop, Kabu and its Chinese-language competitors are thriving. Xiao says user demand has been growing on average 26 per cent per month since Kabu started in 2016. Reams of data it collects reveal that the greatest demand is for short, last-mile journeys that patch the gaps in Vancouver’s spotty public transit network.

“This is a commentary on the fact that we have not been able to move fast enough," says Jas Johal, an opposition Liberal Party lawmaker on a ride-sharing committee. "The market has moved ahead of governments."

Regulators are taking some steps to crack down on illegal rides, issuing 43 violation tickets and 32 cease and desist orders as of the end of February, the ministry of transportation said in an email. Currently, drivers can face a $5,000 fine per day for convicted penalties. The new legislation will raise the stakes significantly to $100,000 a day, the ministry said.

Canada’s Competition Bureau has weighed in, telling the province to "re-think provincial taxi regulations." So has local billionaire Francesco Aquilini, owner of the Vancouver Canucks National Hockey League team, sparring on Twitter with the airport authority when it urged "a level playing field for existing operators."

"Saskatoon has fricking Uber....come on Vancouver," read a post on the Facebook group Bring Uber to Vancouver last month. Public opinion polls have consistently shown at least 60 per cent support for ride sharing.

For a tourism and technology-driven city that aspires to be Silicon Valley North, the opposition to ride sharing can often be head scratching.

"I don’t support Uber at all," the mayor of Surrey, British Columbia, Doug McCallum, said in a live debate in October, as he campaigned against ride sharing. Surrey is a sprawling suburb that’s the heart of the powerful taxi-industry lobby. At its peak, a Vancouver taxi license was worth as much as $1 million and drivers were mortgaging homes to purchase them.

In the meantime, the Chinese-language operators have stayed out of the debate and gotten on with business.

Kabu has signed on 1,800 drivers, averages 2,500 rides a day, and has rolled out food delivery services. It has loftier aspirations of ushering Canada into a cashless era in which users could use Kabu to pay bills, arrange document deliveries, buy tickets and more.

“We want to be the Alipay of Canada," says Gokabu co-founder Hill Huang. "Car riding is only one part. If Uber can solve the problem, perfect."