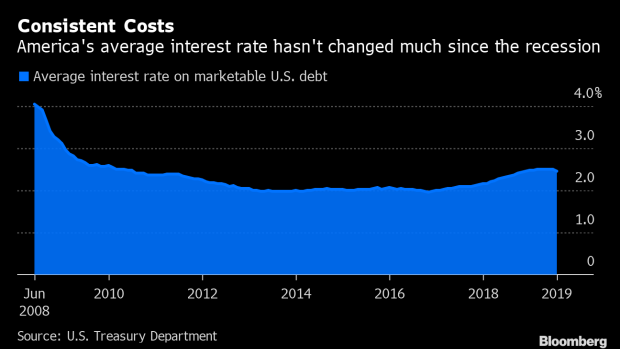 (Bloomberg Opinion) -- President Donald Trump has a select few things on his mind if his Twitter feed is any indication. One of them apparently is what he sees as unfairly high borrowing costs in the $16 trillion U.S. Treasury market.

“INTEREST COST COULD BE BROUGHT WAY DOWN,” he tweeted on Wednesday, adding that “the USA should always be paying the the lowest rate.” On Thursday, after the European Central Bank cut its benchmark rate further below zero, he lamented that some countries in the region “get paid to borrow money, while we are paying interest!” All the while, “the Fed sits, and sits, and sits.”

I wrote earlier this week about the president’s misguided monetary policy views. Simply put, there’s no reason for the Federal Reserve to drastically lower interest rates right now, with the unemployment rate close to a five-decade low and a core measure of inflation rising in August by the most since 2008. But what’s especially curious about Trump’s latest missives is that he’s less focused on cutting interest rates for the sake of boosting the economy and more as a way to curb the nation’s borrowing costs.

This is hardly surprising given his background in real estate. The concept of effectively being paid to sell bonds is any borrower’s dream. And U.S. companies have issued billions of dollars of debt in recent weeks at record-low yields.

But the truth is, while the Fed has raised short-term interest rates, overall borrowing costs for the U.S. are barely different now from what they were at this time during Barack Obama’s first term as president. This might come as a surprise to those who track the day-to-day swings in benchmark Treasury yields or have seen short-term interest rates climb steadily for the past two and a half years.

In fact, the interest rate on marketable Treasuries has averaged 2.26% so far during Trump’s presidency, less than the 2.42% average during Obama’s first term and comparable to the 2.21% rate throughout his eight years in office. For some context, when George W. Bush took office in January 2001, the average interest rate was 6.62%.

Simply put, Trump doesn’t have much justification to go after the Fed based on borrowing costs. (It’s also not really the central bank’s problem, nor the president’s, but more on that later.)

Of course, the total amount of U.S. public debt roughly doubled during Obama’s eight years in office, reaching almost $20 trillion by January 2017. So overall interest payments climbed from $383 billion in the 2009 fiscal year to almost $433 billion by 2016. But at the same time, budget deficits declined, both overall and as a percentage of gross domestic product, each year from 2011 through 2015. They have since soared under Trump. As a result, interest costs were a record $523 billion in the 2018 fiscal year and have already surpassed that in 2019.

Still, it could be a lot worse. The reason that America’s average interest rate is roughly the same under Trump as Obama, even though the Fed has raised its benchmark lending rate eight times (and cut once) since the 2016 election, mostly boils down to longer-term Treasury yields.

While an inverted yield curve is often thought of as a precursor to recession, it’s also something of a boon to borrowing costs. And ever since Trump took office, the difference between short- and long-term Treasury yields has declined. Just two weeks ago, on Aug. 28, the 30-year U.S. bond yield reached an all-time low of 1.9%. It touched 4.83% during Obama’s first year.

On Thursday, the Treasury auctioned $16 billion of the securities at a yield of 2.27%, the second-lowest level ever for the maturity. These rates are catching the eye of both the president — who tweeted that the U.S. could be “substantially lengthening the term” of its debt — and Treasury Secretary Steven Mnuchin, who said 50-year bond sales could happen as soon as next year if there was enough investor demand.

“We would look at the spread of 50-year to the 30-year and we would only issue if it’s an appropriate spread — but innovation is an important thing,” Mnuchin said. Of course, his department has toyed with the idea before only to determine that it couldn’t reliably and predictably issue such long-dated obligations.

Regardless of whether ultra-long bonds become a reality, President Trump should take comfort in knowing that the U.S. is in the midst of one of the most favorable interest-rate regimes in its history. The Fed is almost surely locked into cutting short-term rates again next week, which should continue to lower the level of overall interest rates. Sure, Germany can issue 30-year bunds with negative yields, but that comes with its own problems that are only starting to play out.

One crucial point that could get lost in all the minutiae: How much the country pays in interest really shouldn’t even matter to a president. As Bloomberg News’s Joe Weisenthal wrote, “the federal government is not capital-constrained like a private enterprise. The government spends its own money. … The real constraint on government spending is politics.”

Indeed, seemingly the only reason to be concerned about interest payments is because, in theory, they could “crowd out” other spending or create a need for higher taxes to balance revenue and expenses. But clearly neither party has shown any fear of running budget deficits when in power, though when they’re in the minority it’s a different story. So, in practice, all the fretting is irrelevant.

Borrowing costs probably aren’t on the Fed’s radar, either. The central bank uses interest rates merely as a way to achieve its dual mandate of maximum sustainable employment and stable prices. Because it only controls the short end, its hikes and cuts come and go in terms of influencing the Treasury’s debt stack.

With the central bank’s rate decision coming next week, President Trump seems likely to weigh in on the move, no matter what it is. It’s a fairly safe bet that he’ll wish the dollar would weaken. But his attention to interest costs is largely a waste of time. He should be more focused on making sure Chair Jerome Powell follows through on his refrain to “act as appropriate to sustain the expansion.”