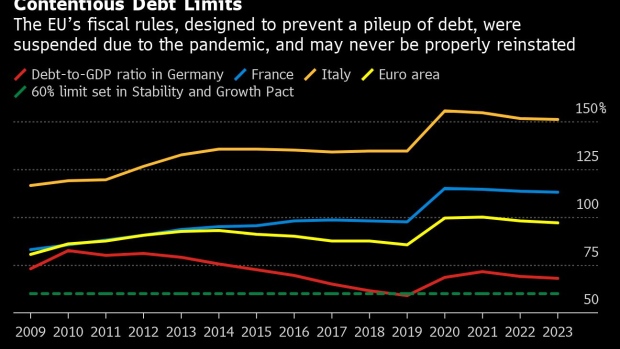 Christian Lindner, leader of the Free Democratic Party (FDP), attends a statement to the media after exploratory coalition talks in Berlin, Germany, on Friday, Oct. 15, 2021. Germany's Olaf Scholz reached a milestone in his bid to succeed Angela Merkel as German chancellor by getting his potential partners close enough to enter formal negotiations for a coalition government. Photographer: Liesa Johannssen-Koppitz/Bloomberg , Bloomberg

“Debts in the European Economic and Monetary Union have increased sharply due to the pandemic,” Lindner, the chairman of the pro-business Free Democrats, said at news conference in Berlin on Tuesday.

“That’s why we are sensitive to avoiding a situation of fiscal dominance in the future,” he added. “The central bank must also be able to respond to monetary developments with its instruments.”

The remarks on the eve of outgoing Finance Minister Olaf Scholz’s inauguration as chancellor represent a change of tone. While consistent with Lindner’s previously outspoken style on monetary matters, his predecessor’s approach was largely to try to avoid treading into matters of controversy at a euro-zone level.

Lindner went on to discuss how concern about so-called “fiscal dominance” will inform his approach to negotiations next year on the future of the European Union’s Stability and Growth Pact governing members’ debts and deficits.

“This is also the reason why the Economic and Monetary Union should continue its commitment to the idea of stability in connection with efforts for growth and investment,” Lindner said. “With this in mind, the future government will also be involved in the discussion about the review of the fiscal rules next year.”

He pledged that the incoming coalition of Scholz’s Social Democrats, the Greens and his FDP will “maintain continuity” and advocate stability in its own approach to public finances, and that it will keep a close eye on surging consumer prices.

“We are observing inflation with great attention,” he said. “The pandemic has undoubtedly combined a number of special effects. Now we will have to watch the development over the next few years, and the fiscal policy of Germany will of course take this into account.”