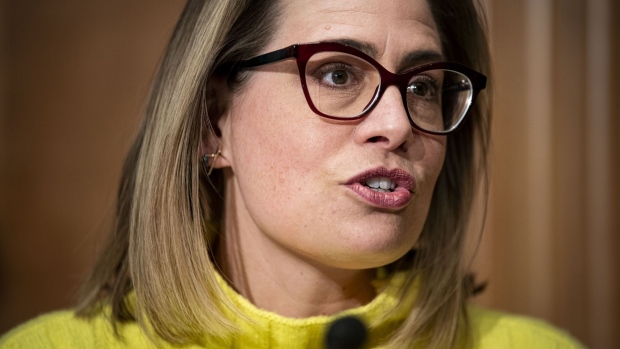 (Bloomberg) -- Newly independent Senator Kyrsten Sinema of Arizona is being courted by Senate Republicans, as the Democrat who wants to challenge her if she runs for reelection raked in $1 million the day after announcing his candidacy.

Representative Ruben Gallego has capitalized on Sinema’s unpopularity with Democrats in Arizona and nationwide, pulling in donations from 27,000 people after making his much-anticipated 2024 bid for the Senate seat official on Monday.

Since declaring as an independent in December, Sinema has continued to align with Democrats on many issues and caucuses with them for purposes of Senate control, taking turns presiding over the chamber and keeping her committee assignments.

But Sinema triggered backlash from Democrats in her home state over her stances on taxes and keeping the Senate’s filibuster rule. As an independent, she would be spared from having to compete in a Democratic primary. After that, though, she’d have a tough road in a three-way race against a Democratic candidate and a Republican in the narrowly divided swing state.

“As she knows, because I’ve conveyed this to her many times, we would welcome her in our caucus,” Thune said at the Capitol late Monday.

Thune said Sinema was welcome to stay an independent and caucus with Republicans or fully switch to the GOP, either of which would complicate, but not end, Democratic control of the chamber. A switch potentially could give her crucial party support ahead of any reelection bid, as backing from Democrats is uncertain with the more liberal Gallego in the race.

After the 2022 elections, Democrats solidified their Senate majority with 51 seats, up from a 50-50 split, including Sinema and two other independents who also caucus with Democrats and are more closely aligned with the party — Bernie Sanders of Vermont and Angus King of Maine.

Many Democratic senators this week declined to say whether they’d support Sinema or Gallego, including fellow Arizona Senator Mark Kelly and Senate Majority Leader Chuck Schumer. Many of them noted she hasn’t yet said whether she will run.

“Senator Sinema is an excellent congressmember, Senate member, and she has done a lot of good things here. But it’s much too early to make a decision,” Schumer said Tuesday when asked what he would do.

Senate Republican Leader Mitch McConnell of Kentucky praised her for saving the filibuster and being at the center of bipartisan deals.

One who is behind her and said Democrats should back her if she runs: West Virginia Democrat Joe Manchin, her frequent ally. The duo last week high-fived in Davos, Switzerland, at a World Economic Forum panel over their mutual support for the filibuster rule, which thwarted assorted Democratic priorities including voting rights in the previous Congress.

The Senate seat from Arizona is rated a tossup by the Cook Political Report. It’s part of a very difficult political map for Democrats, in which they’ll be defending 23 seats, compared with 11 for Republicans.

Manchin has not decided whether to run again next year in a state where former President Donald Trump won in blowout fashion. Nor has Jon Tester of Montana, another state Trump won easily. Sherrod Brown is running for reelection in Ohio, a third Trump-won state.

Sinema’s top priority this year has been to forge a bipartisan deal to address the border and immigration, something that has eluded lawmakers for decades but is a major issue in her state. She recently took a bipartisan delegation to the border with Senator John Cornyn of Texas, a former GOP whip, in hopes of helping build a compromise.