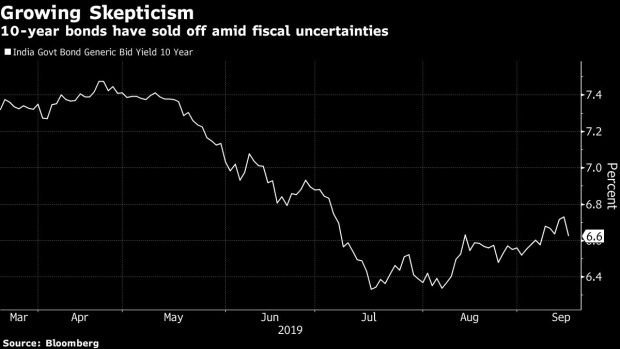 Commuters walk up a pedestrian overpass at Masjid Bunder train station in Mumbai, India, on Thursday, Aug. 29, 2019. Credit analysts are keeping a watchful eye on signs of stress in Indian household debt after unemployment rose to a 45-year high and as lenders grapple with the worst soured debt levels of any major economy. Photographer: Dhiraj Singh/Bloomberg , Bloomberg

(Bloomberg) -- India’s drip-feed approach to reviving growth from a six-year low is doing little to lift the pall over the nation’s bond market.

Bond yields have risen in five of the past seven weeks as traders continue to fear that the government, which has avoided big-bang spending, may still resort to big giveaways. And this week’s oil shock has had investors looking for assurances that the administration will stick to a goal of narrowing its fiscal deficit.

“The mood is cautious and has been exacerbated by what happened in the oil market,” said Vijay Sharma, executive vice president for fixed-income at PNB Gilts Ltd. in New Delhi. “Any hint the deficit is going out of control will take the air out of the market.”

Benchmark yields jumped the most in 16 months in August. Flip-flops over the government’s plans for a $10 billion overseas debt sale added to the pain as the issuance was meant to shift part of a record 7.1 trillion rupees of planned borrowings abroad.

“Investors aren’t willing to enhance bets unless there are clear commitments on the fiscal deficit and sovereign bond issuance,” Sharma said.

The government will make every effort to ensure that the revenue loss from its latest booster won’t affect its goal to narrow the fiscal gap to 3.3% of GDP, Finance Minister Nirmala Sitharaman said Saturday while unveiling the third set of measures in four weeks.

She has refrained from announcing large new spending, and has instead given export incentives, tax breaks and eased foreign investment rules in sectors including retail and coal mining.

Still, yields climbed 10 basis points to 6.73% over two days as the surge in oil following the weekend’s strike against Saudi’s oil facilities renewed worries about fiscal deficit. Bonds rose for a second day, with the yield falling 3 basis points at 10:28 a.m. in Mumbai, as oil held its drop from the dramatic spike.

With risk appetite all but exhausted, the government’s fiscal second-half borrowing plan due before month-end will be scrutinized for clues on whether its budget targets would be met.

“The underlying point is that total borrowings -- center, states and state-run companies -- are pretty much exhausting all the resources available locally,” said Suyash Choudhary, head of fixed income at IDFC Asset Management Co. “Market’s risk appetite is tired at this point.”

--With assistance from Karthikeyan Sundaram.

To contact the editors responsible for this story: Tan Hwee Ann at hatan@bloomberg.net, Ravil Shirodkar