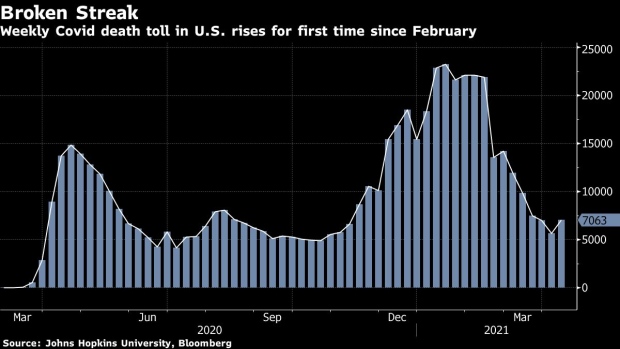 Health workers administer a dose of the Bharat Biotech Ltd. Covaxin vaccine to an employee of the income tax and the central goods and services tax (CGST) departments at the Central Revenue building in New Delhi, India, on Monday, April 12, 2021. Asia's third-largest economy is potentially on track to regain the second spot from Brazil after adding a record 168,912 cases in a day, taking the tally to 13.53 million cases Photographer. T. Narayan/Bloomberg , Bloomberg

(Bloomberg) -- India overtook Brazil as the country with the second-most cases in the world. A study in Brazil showed that Sinovac Biotech Ltd.’s vaccine is slightly more than 50% effective, raising new concerns over the efficacy of the China’s suite of Covid-19 shots.

The U.K. hit its goal of offering a shot to all those over 50 three days early. England reopened shops, pub gardens, gyms and hair salons after months of lockdown, even as the Mayor of London called for wider testing in two city boroughs following a new outbreak.

The weekly death toll from Covid-19 in the U.S. rose for the first time since February and infections climbed for a fourth straight week, even as vaccinations surge. The Biden administration rejected a plea for more vaccine doses from Michigan, which has the nation’s highest infection rate.

India overtook Brazil in the number of Covid-19 cases to become the country with the second highest number of cases, trailing only the U.S. India reported almost 13.53 million infections, compared with 13.52 million cases in Brazil. Latin America’s largest economy registered 35,785 cases and 1,480 deaths in the last 24 hours.

The U.K. said it hit its target to offer a first vaccine shot to all people over 50 ahead of schedule, a significant boost to Prime Minister Boris Johnson’s plans to unlock more parts of the economy.

The goal was to do so by April 15, and people in their late 40s are expected to be invited to receive vaccines in the “coming days,” the Department of Health and Social Care said.

“We will now move forward with completing essential second doses and making progress toward our target of offering all adults a vaccine by the end of July,” Johnson said in a statement.

London Mayor Sadiq Khan urged people who live, work or study in two city boroughs to be tested following an outbreak of new cases linked to the South African variant.

Anyone over the age of 11 should book a test as soon as possible, whether they’re symptomatic or not, so infected people can be identified and the spread of the virus limited, Khan said in a post on Twitter.

There have been 44 new cases and 30 probable cases identified in Wandsworth and Lambeth, Khan said.

The Calgary Stampede can probably go ahead this year as Alberta’s vaccination campaign accelerates, the Canadian province’s premier said.

The yearly festival that draws thousands of visitors was canceled due to the pandemic last year, but it “will be possible” in 2021, albeit with public heath precautions, Jason Kenney said in a webcast press conference.

The province that holds the world’s third-largest crude oil reserves in its oil sands is ramping up vaccinations and aims to have two thirds of the population protected from Covid-19 by the end of June, just in time for the festival and rodeo that’s normally held each July.

In 2013, following a flood that devastated down

Ireland recommended the AstraZeneca vaccine be given to people age 60 and older only, becoming the latest country to restrict its use amid blood clot concerns. People under 60 who have already received a first dose should have the interval before the second shot extended to 16 weeks from 12 weeks “to allow further assessment of the benefits and risks as more evidence becomes available,” the state’s vaccine advisory group said Monday night.

While the vaccine is “highly effective,” authorities recommended the restriction because the reported clotting events carry “a very high risk of death or severe outcome,” the group said.

Russia suspended most air travel with Turkey, citing rising coronavirus infections, cutting off a key source of tourism revenue to the country amid tensions over Ankara’s support for Ukraine.

Most charter and regular flights will be suspended between April 15 and June 1, but two flights a week will still run between Moscow and Istanbul, Deputy Prime Minister Tatyana Golikova said in a televised briefing Monday. Fully 80% of the cases of Covid-19 identified in Russians returning from abroad were in people who came from Turkey, public-health chief Anna Popova told the same briefing.

The move is what Beshear called a creative strategy to incentivize indifferent Kentuckians by dangling a carrot -- the removal of bar curfews and restaurant capacity restrictions that have hurt tourism centered on the state’s $8.5 billion bourbon-making industry.

Beshear’s plan called on employers in the rural and increasingly Republican state to encourage 900,000 more people to get a shot at a time when enthusiasm for the vaccine is waning. Roughly 42% of the state’s vaccine allotment went unused during the week of March 29 through April 2, and the state currently has more than 400,000 vaccines available to distribute.

The Biden administration on Monday put Michigan’s Democratic governor on notice that her plea for more vaccine to be sent to the state isn’t going to happen, despite a surging Covid-19 outbreak there.

Shutdowns are needed to control the spike in cases, not more vaccine, said Rochelle Walensky, the head of the U.S. Centers for Disease Control and Prevention in a Monday news briefing. Meanwhile, White House Press Secretary Jen Psaki said in a separate briefing that the administration is “not in a place, nor will we be, where we take supply from one state to give them to another.”

Michigan Governor Gretchen Whitmer has urged the federal government to increase the amount of vaccine sent to Michigan, which has the highest rate of new infections in the U.S.

New York state will be giving vaccines directly to colleges and universities so they can administer them to their students, Governor Andrew Cuomo said. The state is focusing on the 18-to-24-year-old population, which is growing in positivity, Cuomo said Monday during a press conference at Suffolk County Community College.

Cuomo urged students to protect themselves and others by getting the vaccine. The goal is to get students vaccinated this school year before they return home for the summer, he said.

The city of Vienna extended the regional lockdown measures for the Austrian capital until May 2 as intensive-care resources are increasingly strained by severe cases of coronavirus patients, Mayor Michael Ludwig told reporters. That means non-essential shops, services such as hairdressers will remain closed. Schools will also remain shut for most students until April 25. The lockdown was originally planned to be lifted gradually from next week.

Kenya will only accept applications for emergency use of Covid-19 vaccines for jabs that have been listed by the World Health Organization, according to Ronald Inyangala, director in charge of products registration at the Pharmacy and Poisons Board.

A study into Bharat Biotech’s Covaxin has been temporarily stopped until the vaccine gets WHO approval, Inyangala said by phone on Monday. Kenya has so far allowed emergency use of AstraZeneca’s vaccine and Russia’s Sputnik V. The use of the latter, which hasn’t been listed by WHO, was frozen last week.

New York City surpassed 5 million vaccine doses administered, Mayor Bill de Blasio said Monday. The city is now doling out over half a million doses a week in its quest to get 5 million of the city’s 8 million residents fully vaccinated by June, he said. A new vaccination site in Times Square opens Monday with dedicated appointments for film, television and theater workers as the city seeks to jump-start New York’s all-important arts and entertainment industry.

The weekly death toll from Covid-19 in the U.S. rose for the first time since February, topping 7,000 for the period ending Sunday. Fatalities are again averaging about 1,000 a day, data compiled by Johns Hopkins University and Bloomberg show. Meanwhile, infections have climbed for four straight weeks -- the longest streak since November. Two weeks ago, the director of the Centers for Disease Control and Prevention warned of “impending doom” even though more people are getting vaccinated.

Experts from the European Medicines Agency visited a pair of clinics in Moscow that were involved with Phase 3 trials of Russia’s Sputnik V vaccine, Interfax reported Monday, citing an unidentified person familiar with the trip.

EU regulators are conducting a rolling review of Sputnik V, a process that could take several months. The inoculation has been approved in more than 50 countries, now including India.

India granted emergency use approval to Russia’s highly effective Sputnik V coronavirus vaccine, making it the third such shot approved by the nation as it races to contain an escalating health crisis amid a record daily surge in infections.

India reported a record 168,912 new Covid-19 cases Monday, with its total tally pushing past 13.5 million. India has seen more than 170,000 Covid deaths and administered 104.5 million vaccinations so far, according to data from its health ministry.

Some parts of India have already imposed partial lockdowns while states such as Maharashtra -- where financial hub Mumbai is located -- are seeing vaccine shortages. Adding a third vaccine to the country’s arsenal could ease the shortfall.

Concern is mounting that China’s Covid-19 vaccines are less effective at quelling the disease, raising questions about nations from Brazil to Hungary that are depending on the shots and the country’s own mammoth inoculation drive.

Research released Sunday showed the rate for Sinovac Biotech Ltd.’s vaccine -- deployed in Indonesia and Brazil -- was just above 50%, barely meeting the minimum protection required for Covid vaccines by leading global drug regulators. The other Chinese shots have reported efficacy rates of between 66% to 79%.