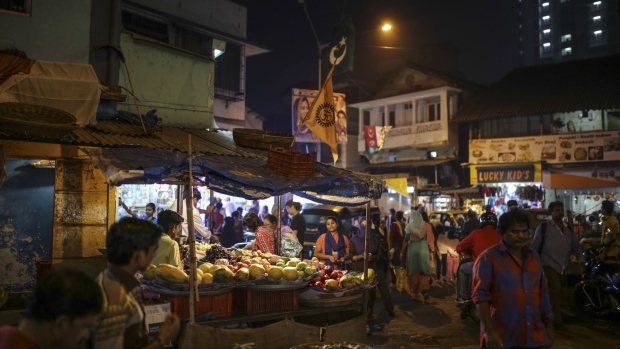 A customer buys vegetables from a street vendor in Lucknow, Uttar Pradesh, India, on Monday, Dec. 30, 2019. Uttar Pradesh -- a state with more people than Russia in which Muslims make up almost a fifth of the population -- has seen some of the most intense clashes over a new religion-based citizenship law. Passed on Dec. 11 in a parliament controlled by Prime Minister Narendra Modi’s ruling party, it gives preference to undocumented migrants of all faiths except Islam from neighboring Afghanistan, Pakistan and Bangladesh to seek Indian citizenship. Photographer: Prashanth Vishwanathan/Bloomberg , Bloomberg

(Bloomberg) -- India’s inflation may have peaked in January and will probably ease in coming months, allowing the central bank room to resume interest-rate reductions.

Data Wednesday showed retail inflation surged to 7.6% last month from a year earlier, mainly on account of costlier fuel and elevated food prices. That’s the highest level since May 2014 when inflation was at 8.3%.

The good news is food prices, especially those of vegetables, are coming off the boil, which analysts predict will set the course for deceleration in price-growth. Inflation will ease to below 6% by March, according to Rahul Bajoria, senior economist at Barclays Bank Plc in Mumbai.

“While onion prices are already falling materially on the back of greater supply, we expect the January print to mark the peak in CPI,” Bajoria said. “Vegetable prices will likely drive this drop, along with some expected declines in petroleum prices.

Slowing consumer-price gains will allow the Reserve Bank of India to keep the door open for more policy easing to boost credit demand in an economy that’s on course for its weakest expansion in 11 years. After delivering 135 basis points of cuts in five moves last year, the central bank cited high inflation for pausing in December.

With the bulk of those reductions yet to be passed on by banks to their customers, the RBI turned to unconventional policy tools to keep borrowing costs down.

The Monetary Policy Committee last week kept the benchmark interest rate unchanged at a decade low of 5.15%, with Governor Shaktikanta Das saying there was policy space available for future action.

“We expect the RBI to maintain its accommodative hold at its next review, in April, and leave it’s benchmark rate at 5.15%. Beyond that, inflation is likely to ease back within the 2%-6% target range, which should open up room for a rate cut in June.”

Interest rate swaps are pricing in the chance of a rate cut in the next 12 months, while economists expect 25 basis points of rate cuts this year.

The view is supported by the central bank’s forecast that inflation will ease in January-March to 6.5% and further to 5%-5.4% in the first half of the financial year beginning April 1. The RBI has a mandate to keep inflation in a range of 2%-6%. Economists surveyed by Bloomberg see inflation at 6.3% in the January-March period and 5.3% the following quarter.

Underlying inflation, which strips out volatile food and petroleum products, is expected to remain muted. While it inched up to 4.2% in January, economists say that was mostly on account of higher telecommunication tariffs amid overall demand remaining subdued.

Recent surveys from the central bank showed consumer sentiment has worsened to a near five-year low while slack in manufacturing companies widened to its most on record. The findings temper any optimism from recent high-frequency indicators such as purchasing managers’ surveys that showed a pick-up in both services and manufacturing sectors.

What’s uncertain is the timing of any cut. Teresa John, an economist at Nirmal Bang Equities Pvt. in Mumbai, is penciling in a 25 basis point easing but not before December.

“We do not see inflation falling significantly below 6% until September,” John said.

--With assistance from Vrishti Beniwal.

To contact the reporter on this story: Anirban Nag in Mumbai at anag8@bloomberg.net

To contact the editors responsible for this story: Nasreen Seria at nseria@bloomberg.net, Karthikeyan Sundaram, Jeanette Rodrigues