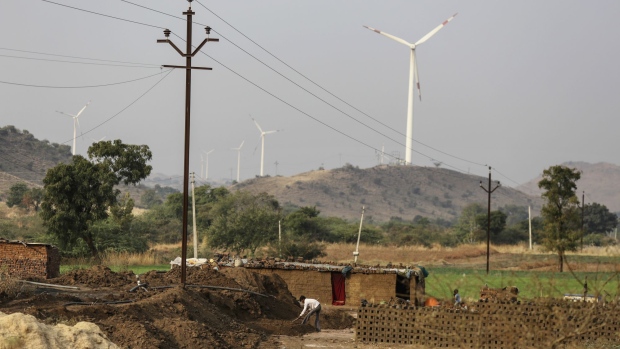 Laborers work below an electricity pole operated by Maharashtra State Electricity Distribution Co. (MSEDCL) as Suzlon Energy Ltd. wind turbines stand in the background in Nadurbar district, Maharashtra, India, on Tuesday, Jan. 17, 2017. Indian Prime Minister Narendra Modi pledged to bring reliable power to all citizens during the campaign that propelled him into office in 2014, the same year the World Bank pegged India as home to the world's largest un-electrified population. While his government has made progress meeting its 2019 deadline, many families are still missing out, holding back some of India's poorest, most-vulnerable citizens and preventing the country from achieving its development ambitions. Photographer: Dhiraj Singh/Bloomberg , Bloomberg

(Bloomberg) -- India’s renewables installations are set to slow after the country enforced a three-week lockdown to curb the spread of coronavirus, according to BloombergNEF.

Wind power installations in 2020 by independent power producers could decline almost 18% from the prior year to 1.95 gigawatts, according to BNEF, which cut its estimate for the year by 24%. Solar power installations are seen at 6.8 gigawatts (AC), down 20% from an earlier forecast.

India’s steps to counter Covid-19 are weighing on the broader economy, with most factories and offices forced to halt operations. An extension of the lockdown could spur a further reduction in targets, BNEF said.

Meanwhile, the government is allowing extensions for commissioning projects to help companies re-mobilize workers after the lockdown. This follows guidance last week to project developers that they could invoke force majeure on supply chain disruptions caused by the virus.