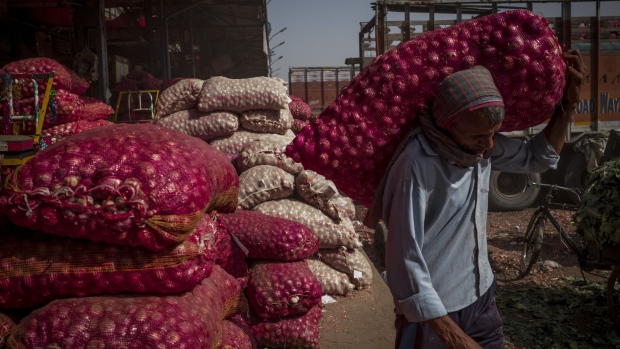 A worker carries a sack of onions from a stack of onions and potatoes at the Azadpur wholesale market in New Delhi, India, on Sunday, June 5, 2022. India's Ministry of Agriculture data show tomato price inflation surged to 61% month on month in May. Even so, other vegetable prices have come down sharply from elevated levels in April. Photographer: Anindito Mukherjee/Bloomberg , Bloomberg

(Bloomberg) -- India’s retail inflation softened for a third straight month in July, taking some pressure off the central bank from pursuing sharp monetary tightening to return price gains back to its target band.

Consumer prices rose 6.71% last month from a year earlier, dipping below 7% for the first time in four months, data released by the Statistics Ministry showed Friday. That compares with an estimate of a 6.75% gain in a Bloomberg survey of economists and a reading of 7.01% in June.

Cooling global commodities are helping ease price pressures in Asia’s third-largest economy. Price gains that quickened the most in eight years in April and topped the Reserve Bank of India’s 2%-6% target have prompted the central bank to boost the key rate to pre-pandemic levels.

The RBI last week raised borrowing costs by another half-point and signaled more hikes could be in the offing. The central bank, which sees inflation averaging at 6.7% in the year ending March, will get comfort from the July print amid rising risk of a global recession.

“Even as India’s inflation has peaked, it still warrants caution especially since underlying inflation appears sticky,” said Madhavi Arora, lead economist at Emkay Global Financial Services Ltd. “While the central bank is still far from its supposed neutral rate, we believe we are near-peak RBI-hawkishness.”

Food prices, the biggest component of inflation basket, rose 6.75% in July from a year ago, while fuel and electricity prices increased 11.76%, according to the government. Clothing and footwear prices jumped 9.91%, while housing prices climbed 3.9%.

Slowing inflation gives the RBI scope to go easy on tightening, Elara Capital economist Garima Kapoor told Bloomberg Television before the data release. “Most forward-looking indicators suggest that the worst for inflation might be over,” she said.

The latest data follows softer-than-expected US inflation print that raised expectations the Federal Reserve will raise interest rates at a slower pace. India’s wholesale price inflation due Aug. 16 would show price gains easing to 13.75% in July, from 15.18% the previous month, according to a separate survey as of Friday.

The RBI’s forward looking surveys show Indian households expect inflation to moderate in the coming months while consumer confidence picks up. That bodes well for the economy ahead of the annual Diwali festival season in October, a period seen auspicious for new purchases.

Factory output grew by 12.3% in June from a year ago, data released separately showed.

The RBI is scheduled to next review rates on Sept. 30 while the government is due to report the April-June economic performance on Aug. 31.

(Updates with chart and details throughout.)