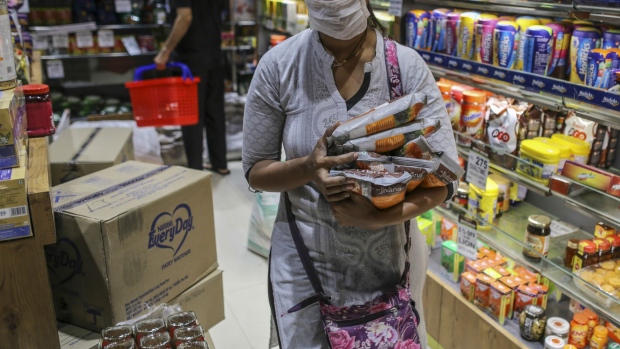 A customer wearing a protective mask shops in a supermarket in Mumbai, India, on Wednesday, March 25, 2020. India imposed a three-week long nationwide lockdown for its 1.3 billion people, the most far-reaching measure undertaken by any government to curb the spread of the coronavirus pandemic. Photographer: Dhiraj Singh/Bloomberg , Bloomberg

(Bloomberg) -- A pick-up in consumer demand, record-low interest rates and improving prospects for the manufacturing sector will probably fuel the rally in Indian stocks, even as the dizzying pace of gains increases risks for the economy.

These are the conclusions of new research from Bloomberg Intelligence and Bloomberg Economics after the NSE Nifty 50 Index climbed 130% to a record from lows touched in March 2020, supported by the central bank’s liquidity injections, millions of new retail investors, and the regulatory crackdown in China. The rally has added roughly 1 percentage point to GDP growth each quarter since October-December.

“The case for India’s equities remains structurally positive, we believe, amid resurgent consumer demand, manufacturing in a ‘China Plus One’ world, regulatory overhaul and the trajectory of monetary and fiscal policy,” Gaurav Patankar and Nitin Chanduka, analysts with Bloomberg Intelligence, wrote in a note.

However, the sharp run-up in gains has increased the economy’s vulnerability to a market setback. The Nifty is now trading at 22.2 times estimated 12-month earnings, well above its five-year average of 18.5. By comparison, the MSCI Emerging Markets Index is trading at a multiple of 12.7.

A retreat for the Nifty, trading at about 35% above its historical trend level, would reduce GDP by 1.4% in the same quarter of the shock and by 3.8% over the following year, Ankur Shukla, an economist with Bloomberg Economics, wrote in a separate note.

“The higher stocks climb, the greater the risks to the economy if they correct -- an important consideration at a time when the Federal Reserve is weighing the timing of tapering stimulus,” Shukla said.