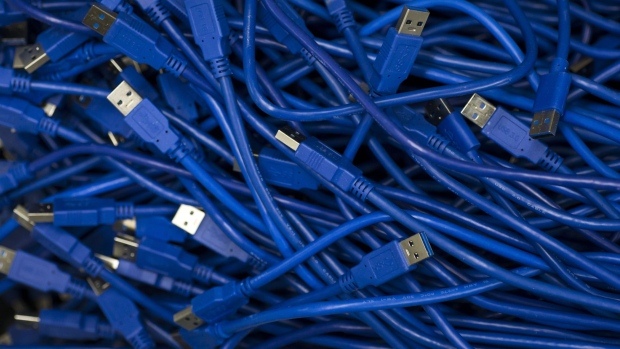 USB cables are seen inside the DMM Mining Farm, operated by DMM.com Co., in Kanazawa, Japan, on Tuesday, March 20, 2018. Japan is moving toward legalizing initial coin offerings, even as countries such as China and the U.S. restrict the fundraising technique because of their risks for investors. A government-backed study group laid out basic guidelines for further adoption of ICOs, according to a report published on April 5. Photographer: Tomohiro Ohsumi/Bloomberg , Bloomberg

A three-judge bench headed by Justice Rohinton F. Nariman agreed with petitions by cryptocurrency exchanges, start ups and industry bodies that had challenged the Reserve Bank of India’s April 2018 decision to ban banks from offering any services to support digital currencies.

The ruling is a boost for virtual currency investors and businesses in India, where a skeptical federal government is mulling stringent regulations. The Supreme Court is separately hearing another case, in which it will decide on regulations for digital currencies, and Wednesday’s judgment weakens the case for strict norms.

Meanwhile, the Indian central bank has been exploring the creation of a sovereign-backed digital currency even as it escalated its crackdown on private instruments like bitcoin, citing the potential for money laundering and other illegal activities.

Opponents of the curbs argued that the central bank wasn’t empowered to issue the ban and its directive hadn’t adequately studied the matter.

To contact the reporter on this story: Upmanyu Trivedi in New Delhi at utrivedi2@bloomberg.net

To contact the editors responsible for this story: Unni Krishnan at ukrishnan2@bloomberg.net, Jeanette Rodrigues