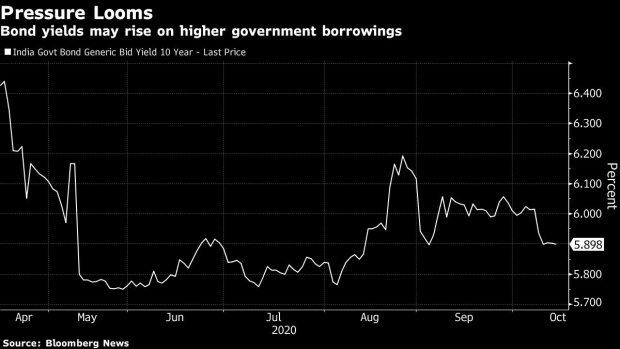 Pedestrians wearing protective masks walk past an out of service traffic signal as the Bombay Stock Exchange (BSE) building stands in the background in Mumbai, India, on Monday, Oct. 12, 2020. India’s financial capital saw its biggest power outage in decades because of a grid failure, disrupting transport networks and hitting trading volume in equities and bond markets. , Bloomberg

The government will sell 4.88 trillion rupees of bonds in rest of the financial year, up from its earlier target of 4.34 trillion rupees for October to March set just two weeks ago, the Reserve Bank of India said in a statement. The increase is due to additional borrowing needed to compensate states for meeting the shortfall in goods and services tax collection.

The pandemic has ravaged revenues of both the federal and state governments and pushed the economy toward the worst contraction on record. Higher bond sales may hurt yields that have been hovering around the lowest in more than a month after Reserve Bank of India Governor Shaktikanta Das announced a raft of measures last week, aimed at easing the supply pressures.

“The market will now look forward to higher weekly open-market purchases if the 10-year bond yields have to remain below 6%,” said Arvind Chari, head of fixed income and alternatives at Quantum Advisors Pvt. in Mumbai. The combined market borrowings will now go well above 20 trillion rupees, he said.

The government which was scheduled to wrap up borrowing by end of January will now extend it to mid-March, according to the new calendar. The extra borrowing of 1.1 trillion rupees will be split equally between 3- and 5-year bonds.

The yield on the benchmark 10-year bonds has been steady at 5.90% for the last three days after declining by 12 basis points since Friday when the RBI announced measures including doubling the size of open-market bond operations.

“Short-end yields would be under pressure tomorrow due to the extra borrowing,” said Shailendra Jhingan, chief executive officer at ICICI Securities Primary Dealership. At the same time, “the RBI’s commitment of maintaining easy monetary policy over the next year and excess liquidity would ensure that there is good appetite for short-end govt bonds,” he said.