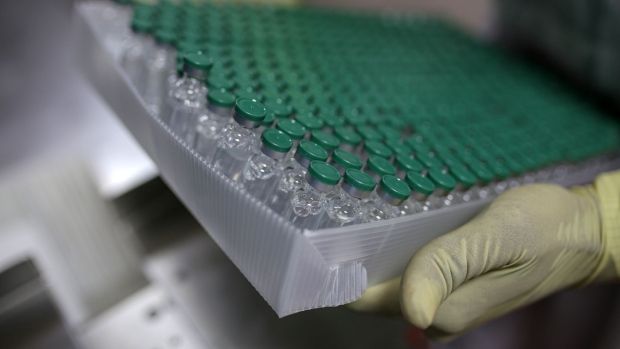 An employees handles vials of Covishield, the local name for the Covid-19 vaccine developed by AstraZeneca Plc. and the University of Oxford, on the production of line at the Serum Institute of India Ltd. Hadaspar plant in Pune, Maharashtra, India, on Friday, Jan. 22, 2021. Serum, which is the world's largest vaccine maker by volume, has an agreement with AstraZeneca to produce at least a billion doses. Photographer: Dhiraj Singh/Bloomberg , Bloomberg

Prime Minister Narendra Modi informed fellow leaders of the Quad grouping -- made up also of the U.S., Australia and Japan -- at their summit in Washington, Shringla said. The Quad countries will pay for the vaccine and India will bear a certain share of the cost, he said.

“This would be ready by the end of October. It would be compatible with our decision to resume vaccine export,” Shringla told reporters. “This will be an immediate delivery from the Quad in the Indo-Pacific region.”

India earlier said it will resume exports of Covid-19 vaccines for the World Health Organization’s Covax initiative from October. Home to the world’s largest vaccine-manufacturing industry, India deferred exports in early April after a surge in delta variant infections began to sweep through the country.

The Quad countries have promised to donate 1.2 billion doses of vaccines globally. Johnson and Johnson is collaborating with India’s Biological E to manufacture the vaccines.