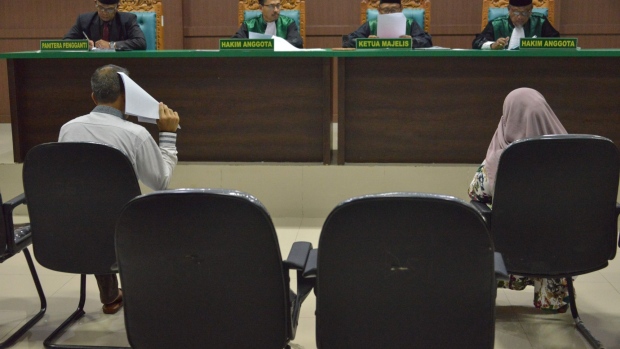 (Bloomberg) -- Indonesian lawmakers have passed a contentious criminal code that outlaws extramarital sex and raises penalties on abortions as part of legislation that sparked violent protests when introduced in 2019.

Parliament passed the bill at a plenary session on Tuesday, which also adds limits to how much people can criticize the president and public institutions, and restricts the rights of LGBTQ citizens. The next step is for President Joko Widodo -- better known as Jokowi -- to sign off on it, followed by a three-year transition period until the law is fully in place.

Jokowi is setting a legacy of cutting red tape and reforming legislation, including this move that sought to remove an existing penal code that dates back to when Indonesia was a Dutch colony. But the law’s passage could undermine his efforts to court investors and bolster economic growth at a time when he’s looking for funds to build a new capital, while further undercutting his support among Indonesians backing a more secular public policy.

“We have tried to accommodate feedback on various issues as best as we could,” Legal and Human Rights Minister Yasonna Laoly said, adding that Jokowi has agreed to issue the law. “We have made a historic decision to do away with the Dutch’s heritage law.”

Though the different party factions in parliament approved the bill, some urged the government to be cautious in enforcing the law to protect the rights of the public, especially the freedom of speech, and for journalists not to be criminalized in carrying out their duties. The law applies to both citizens and foreigners in Indonesia.

Iskan Qolba Lubis, a member of the Islamist political party Prosperous Justice Party, debated against a provision that penalizes insults against the government as well as the president and vice-president. He argued that it would wind back democracy and betray the objective of ‘reformasi’ -- reforms in Bahasa Indonesia -- which was the reason for the ouster of the dictatorial president Suharto in 1998.

“This provision will take away the rights of citizens to voice their opinions. This could be abused by future leaders,” Lubis said in the plenary session on Tuesday. “Throughout the whole world, citizens have to criticize their governments.”

Days of demonstrations erupted after the bill was introduced in 2019, prompting Jokowi to delay the legislation in order to get more feedback from the public. In the end, little was changed, signaling the strength of Indonesia’s conservative religious parties, despite Jokowi’s call to avoid identity politics heading into the 2024 elections.

Lawmakers did have a watered-down version of the legislation they could have taken up, but that was bypassed in favor of the current bill.

US Ambassador to Indonesia Sung Y. Kim said that his country remains “concerned that morality clauses attempting to regulate what occurs in a household between consenting adults can have a negative impact on Indonesia’s investment climate.”

“Criminalizing the personal decisions of individuals would loom large within the decision matrix of many companies determining whether to invest in Indonesia,” Kim said in a speech at the US-Indonesia Investment Summit in Jakarta on Tuesday. “The outcome could well result in less foreign investment, tourism, and travel.”

There are at least 14 articles in the original bill seen as threatening free speech and press freedom. Among them is a defamation law that calls for a maximum of three and a half years imprisonment for insulting the president and vice-president. Others include laws prosecuting slander against government agencies.

Peaceful protests without permits are also punishable with fines and up to six months in jail. Currently, Indonesia’s government typically turns a blind eye toward peaceful assemblies and protests done without permits. That could now change.

In addition, the legislation says journalists can face up to two years imprisonment for publishing “incomplete stories,” though it’s not clear what that means or who will make that determination.

While abortion is already illegal in most cases in Indonesia, the new penal code would punish women who have abortions with as much as four years imprisonment. Under current laws, abortion is illegal though exceptions are made for women with life-threatening medical conditions and for rape, provided that the fetus is less than 12 weeks old.

Another article in the criminal code penalizes extramarital sex, punishing violators with up to one year imprisonment and expanding the definition to include both adultery and sex between people who live together.

Opponents argued that criminalizing adultery isn’t in line with international laws that include a right to privacy. They also say the law risks endorsing public vigilantism, such as a case in 2020 in West Java where a mob in a village accused an unmarried woman and man of engaging in pre-marital sex and forced them to parade around naked, according to the Jakarta Post.

The penal code calls for the prosecution of people who “expresses in public opinions or commit hostile acts or blasphemy against the religion professed in Indonesia” with a sentence of up to five years or a fine.

Indonesia grants official recognition to just six religions and is the world’s most populous Muslim country. The new provision is widely seen as covering insults to Islam and would contravene Indonesia’s obligations under the International Covenant on Civil and Political Rights.

The new penal code would impose a 10-year “probationary period” on individuals who are sentenced to death. If, within that period, a convicted criminal is determined by a judge to have mended his or her ways, capital punishment would be changed to a 20-year jail sentence or life imprisonment.