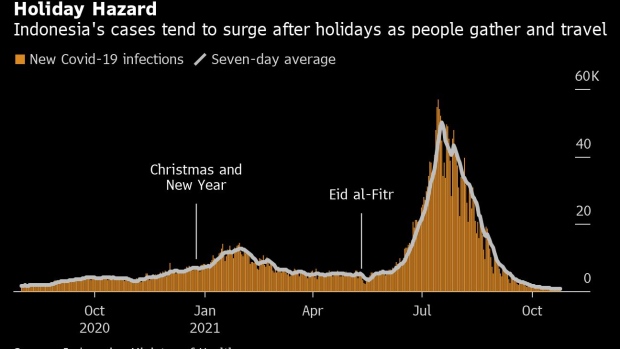 (Bloomberg) -- Indonesia is bracing for a potential upsurge in infections with almost 20 million people estimated to travel in Java and Bali for the year-end holidays.

Testing will be made mandatory on all modes of transport as tourist sites reopen, Luhut Panjaitan, coordinating minister for maritime and investment affairs who’s overseeing the pandemic response, said in his weekly briefing Monday. Currently, negative PCR test results are required for passengers traveling by air.

Restaurants and bars should also adhere to health protocols to help minimize the spread of the virus, he said. This follows reports that some establishments have allowed large crowds in without logging on to the government’s tracing app, while prohibiting photos or videos to avoid public scrutiny, said Panjaitan.

“We must not let our guard down today because of the low cases,” especially since Indonesia’s vaccine coverage is still low compared to its neighbors Singapore and Malaysia, Pandjaitan said.

The Southeast Asian nation is on alert as its previous Covid-19 spikes have been preceded by long holidays. It saw its worst wave of infections in the mid-year after millions of people traveled and gathered with families to celebrate Eid al-Fitr in May, helping accelerate the spread of the more infectious delta variant across the nation.

Covid-19 infections have since gone down sharply after the government expanded testing and reimposed stringent lockdown measures across the country. Indonesia added 460 cases on Monday, the lowest since May 26, 2020. Daily fatalities have also dropped to their lowest in more than a year.

“We can withstand the new wave by staying in control of the number of cases and keeping it below 2,700 per day,” Pandjaitan said.

Indonesia will likewise focus on vaccinating the elderly, which make up most of those who get severely sick or die from the virus. It expects to give a first dose to 168 million people before the year-end, while 123 million people should be fully vaccinated. Only a quarter of Indonesia’s 270 million population are fully inoculated against the disease, compared with 73% for Malaysia and 82% for Singapore, according to Bloomberg Vaccine Tracker.