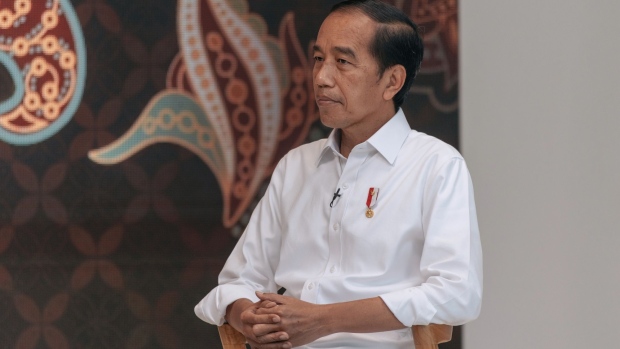 (Bloomberg) -- Indonesia may impose a tax on nickel exports this year, President Joko Widodo said, as the biggest producer of the electric-vehicle battery metal looks to refine more at home.

Jokowi, as the president is known, confirmed that Southeast Asia’s largest economy was considering introducing a levy in an interview with Bloomberg News Editor-in-Chief John Micklethwait in Jakarta on Thursday. That came after an Indonesian government official said early in 2022 that the country was studying a progressive tax on nickel pig iron and ferronickel.

The world’s epic shift into EVs has spurred a surge in demand for battery metals including nickel, lithium and cobalt. While Indonesia has benefited from rising prices of nickel, also used to produce stainless steel, Jokowi wants the nation to move up the EV supply chain. Ultimately, he wants to stop all exports of raw materials.

“That’s what we want also with bauxite, copper, tin, crude palm oil and others,” he said. “We are not being closed, we are being open indeed.”

Indonesia is home to almost a quarter of global nickel reserves, and the metal is one of its major exports along with coal and palm oil.

Refining nickel can create up to $35 billion of added value, the president said late last year. A tax may curb revenue from overseas sales in the short term, however, and it’s also likely to push up global prices that have risen around a third since the end of 2020.

Shares of Asian nickel producers were up on Friday. IGO Ltd. closed up 2.2% in Sydney and Pacific Metals Inc. climbed 3.6% in Tokyo. Indonesian miners PT Aneka Tambang and PT Vale Indonesia also advanced. Nickel jumped almost 4% at the open on the London Metal Exchange and was 0.6% higher as of 8:23 a.m. in the city.

“The market has partly priced in the news before,” said Gao Yin, an analyst at Horizon Insights in Shanghai. “So the impact on prices will be limited before the tax actually lands,” she said, adding that there’s unlikely to be a major impact on flows of nickel to China from the levy.

The country shocked global markets earlier this year when it temporarily banned palm oil shipments to keep inflation in check. The move, which came as many nations were grappling with soaring prices of kitchen staples, sparked fears of worsening food inflation.

The government subsequently changed course as stockpiles recovered, introducing a so-called domestic market obligation that requires producers to sell some palm oil locally. The DMO would be withdrawn if the market is stable, although the national interest will be prioritized, Jokowi said on Thursday.

The president also confirmed in the interview that Indonesia would impose a carbon tax before the end of the year, an early step in its journey to carbon neutrality. First announced in 2021, the levy was delayed earlier this year as the government sought to protect citizens from the impact of rising food and fuel prices.

Indonesia will become the first developing nation in Asia to put a tax on emissions, which officials have previously said would be initially set at 30,000 rupiah ($2.02) per ton of CO2-equivalent for coal-fired power plants. The country is the world’s biggest exporter of thermal coal used in power stations.

The nation has an “ambitious target” to get to net zero by 2060, but it will require technology and funding, Jokowi said on Thursday. “We have renewable energy potential, but shifting from coal to renewable energy is not an easy thing because coal prices are still cheaper.”