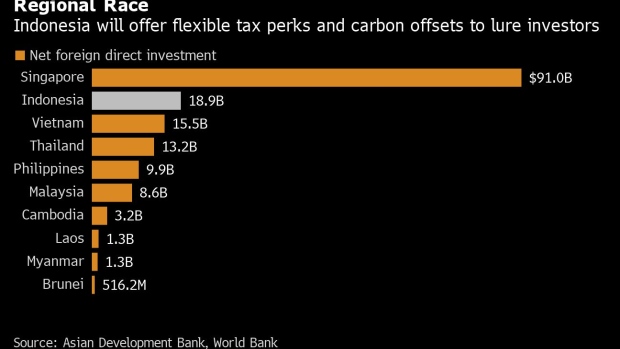 Piles of coal sit at a mine site in East Kalimantan, Borneo, Indonesia, on Monday, Nov. 25, 2019. For Jakarta, a city on the island of Java saddled with some of the worst superlatives in the region⁠—most polluted, most congested, fastest sinking⁠—the floods were an old story, the third time deluges have killed dozens since 2007. The problems have become so overwhelming that, even before the latest catastrophe, President Joko Widodo had decided to build a new capital 1,200 kilometers away on the island of Borneo. Photographer: Dimas Ardian/Bloomberg , Bloomberg

(Bloomberg) -- Indonesia is offering made-to-measure incentives and, potentially, carbon offsets as it competes for investment.

Earlier incentives were standardized in rules that were criticized as outdated, overlapping or even contradictory. With reforms now in full swing after the passage of an omnibus law late last year, the government can tailor benefits to companies looking to set up shop in Indonesia -- provided they make a “very huge” outlay that will significantly develop local industry, said Nurul Ichwan, investment planning deputy at the Investment Coordinating Board.

“Vietnam and Singapore have the same program, but we’re going to complete our package with Indonesia’s abundance of natural resources, its huge market, economic performance and leadership,” he said in an interview.

Competition for foreign investment is heating up in the region, with Vietnam, Thailand and the Philippines boosting incentives or slashing corporate tax rates. Like its neighbors, Indonesia has emphasized an investment push as its traditional growth engine of consumption has slowed amid the pandemic.

President Joko Widodo pushed through an overhaul of job and investment rules last year in a bid to attract funds to Southeast Asia’s largest economy. On Wednesday he appointed Bahlil Lahadalia, head of the Investment Board, to lead the newly formed Ministry of Investment, which has the authority to issue rules to encourage investments. The ministry’s strategy will remain in line with the Investment Coordinating Board’s.

The campaign is showing early wins, with total investment growing 2% to 826 trillion rupiah ($57.2 billion) in 2020 even as the economy suffered its first recession in more than two decades. The government aims to attract 900 trillion rupiah in investment this year.

Indonesia is also considering offering a carbon-trading system that would allow investors to offset their emissions. The investment board is mapping out peatlands, which can store vast amounts of carbon, and artificial lakes in former mining areas that could house floating solar panels, Ichwan said.

The move is aimed at battery and electric-vehicle companies that want to invest in Indonesia’s nickel supply chain but are balking at local processing plants’ reliance on coal for energy. The government has been trying to woo the likes of China’s Contemporary Amperex Technology Co. Ltd., South Korea’s LG Chem Ltd. and the U.S.’ Tesla Inc. to set up shop.

“In the future, the amount of nickel that we have will not offer us the opportunity to get investment into Indonesia if we don’t design production that is environmentally friendly,” Ichwan said. “We have to follow this path, it’s unavoidable for Indonesia.”

As global demand for batteries and other electronics picks up, more investment should flow to Indonesia’s eastern region, helping it catch up to the country’s wealthier, more developed west. The eastern part of Indonesia is now home to more than 30 smelter projects for nickel, iron and bauxite, Ichwan said.

Areas like Kalimantan, Sulawesi, Maluku and Papua are luring companies with cheap land and ample mineral reserves, and the government is working to improve local infrastructure and develop a more skilled workforce, Ichwan said.

“Gradually, we can narrow the gap between western and eastern Indonesia,” he said.