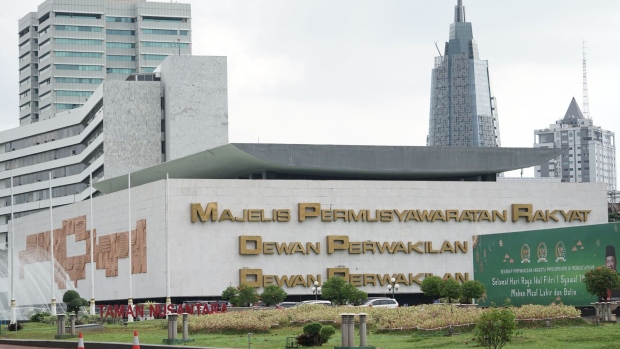 The MPR/DPR Building, the complex of Indonesia's national parliament, in Jakarta, Indonesia, on Thursday, June 24, 2021. At least two parliament commissions have had to defer meetings on Wednesday after hundreds of staff were confirmed to be positive for coronavirus, including at least 17 lawmakers. Photographer Dimas Ardian/Bloomberg , Bloomberg

(Bloomberg) -- Indonesia’s parliament passed the legislation governing the administrative capital on Tuesday, paving the way for the world’s largest archipelago to relocate its capital city to Borneo from Java.

The new capital will cover a main area of 56,180 hectares in East Kalimantan province, according to the new law passed by parliament on Tuesday. It also states that the capital has a special administrative status that will allow the president, with approval from parliament, to appoint its head, scrapping the need for an election often marred by fierce political battles.

The new legislation gives the 489 trillion rupiah ($34 billion) project the legal basis to proceed before the 2024 presidential election. Indonesia, which had contemplated moving the capital for decades, would be the third country in Southeast Asia to relocate their capital cities. Next-door neighbor Malaysia moved its administrative capital to Putrajaya in 2003 and Myanmar changed its capital to Naypyidaw in 2006.

Indonesia Sets 2024 Deadline to Move Its New Capital to Borneo