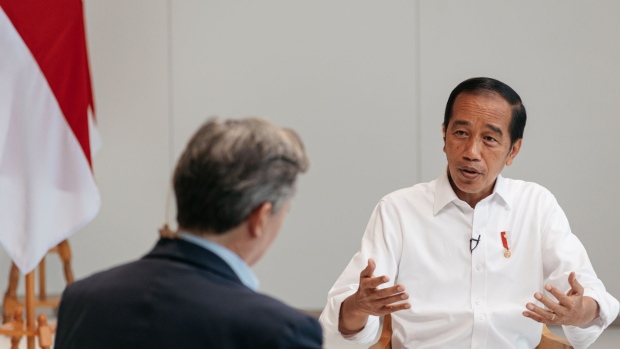 Joko Widodo, Indonesia's president, right, speaks during an interview with John Micklethwait, editor-in-chief of Bloomberg News, at the Hyundai Motor Manufacturing Indonesia in Cikarang, Indonesia, on Thursday, Aug. 18, 2022. Chinese President Xi Jinping and Russian leader Vladimir Putin are both planning to attend a Group of 20 summit in the resort island of Bali later this year, Widodo said. , Bloomberg

After the remarks were reported, the dollar rose in early trade and shares in Asian nickel producers gained.

Below is a transcript of the interview with Jokowi, as the Indonesian president is known. Some of the questions and answers on a variety of topics have been edited for length and clarity:

Q: You are right in the middle of the US-China struggle for influence in Asia. Was US Speaker Pelosi’s decision to visit Taiwan either wise or responsible?

The rivalry of the big countries is indeed worrying. What we want is for this region to be stable, peaceful so that we can build economic growth. And I think not only Indonesia, Asian countries also want the same thing.

Q: There is concern that a conflict over Taiwan would spill over into the South China Sea where Indonesia has a lot of territorial claims. What is your stand?

We do want the region to be peaceful. It shouldn’t come to the point that tensions rise until it affects economic growth and then later on affects the well-being of our people. In my opinion, it is very important that there is a space for dialog between leaders, especially leaders of big countries.

The global situation is extremely difficult and there shouldn’t be further unnecessary issues. We are going through a food crisis and an energy crisis that hasn’t been resolved. The pandemic still exists in some countries.

Q: If Nancy Pelosi really wanted to stand up to China, shouldn’t she have come talking about trade?

A good approach to Southeast Asia is the economic approach. We hope for this because the economic situation here hasn’t recovered yet and we need economic growth. If we are asked to do other things, we would say no because what we need is mutually beneficial trade. What we want is investments that supports the well-being of our society.

Q: On China, you are one of the few people to have met President Xi recently. Has he accepted your invitation to attend the G-20 summit in person?

Q: What about Vladimir Putin?

President Putin has also told me he will come.

Q: Is there any point in having the G-20? What can Indonesia hope to achieve as the host?

Q: On stopping raw commodity exports, what’s coming next? Will you stop exports of nickel?

I‘ll give you nickel as an example. When we exported raw materials four to five years ago, the value was only $1.1 billion. Once we went downstream in 2021, our exports were valued at $20.8 billion. That’s nearly 18 times.

That’s what we want to also do with bauxite, copper, tin, crude palm oil and others. We are not being closed, we are being open indeed. US, China, Europe want to come and cooperate? We are open.

Q: Is Indonesia looking at imposing an export tax on nickel to ensure local mines aren’t depleted by the time the country gets to building its battery and electric vehicle plants? Is this still the case?

It is possible to impose it this year.

Q: You have a $5 billion nickel supply deal with Tesla for five years. Talks with Elon Musk have long been ongoing about building a battery storage facility. Can you update us?

Q: What is holding back Tesla from wanting to build their electric-vehicle supply chain, and how are you offering to address it?

It’s still in discussion. Let’s see the final result later. Everything needs time, I don’t want to go quick with no result. It needs an intense communication and the result will show.

Q: Do you regret the palm oil export ban?

At that time -- the domestic market situation -- there was a price spike of almost double so we made a policy. There were several policies but it didn’t solve the problems four months on, so we stopped exporting crude palm oil. After the domestic price fell, then we resumed exports, I think it’s okay. No problem.

Q: Will you remove the domestic market obligation for palm oil?

If going forward, the price is stable, we can remove the DMO policy. We prioritize our national interest. Palm oil is not just for food. We use it also for B30 biodiesel. It means diversification for crude palm oil and not only for food and cosmetics, but also for biodiesel. So the market becomes bigger and we hope prices become better.

Q: Will you stick by your pledge not to build any new coal power plants and shut all of them by 2055?

Our emissions target is very ambitious.

But to shift from coal to renewable, it is not an easy thing because the cost of coal is still cheaper than geothermal.

The cost for solar panels it is also cheaper, hydro power is actually cheaper but the initial investment is huge, we need investment from outside, to make the shift from coal.

Foreign investment in renewables has fantastic potential, there is geothermal hydro power, but it needs money.

Developed countries have made a lot of promises but that have yet turned into reality. We talked about this three, four years ago but we haven’t seen the realization yet.

Q: What about a new carbon tax?

We are currently preparing the regulation, the law, when it is finished we will immediately implement it. For carbon trading, carbon tax, I think we will probably do it this year.

Q: Do you think a rate hike from the current 3.5% is due to rein in the fastest inflation in seven years?

Our inflation in 2Q is 4.9%, growth is 5.44%. But indeed to keep inflation at bay, we must subsidize 502 trillion rupiah for electricity, LPG, gasoline. We subsidize everything because we don’t want purchasing power, people’s consumption to go down. We also provide large amounts of social assistance to the lower classes of society.

The interest rate is the central bank’s matter. It’s not government business. They have their own calculation on why they don’t increase rates.

Q: Are you still keen to have parliament pass amendments to the central bank charter that would broaden its mandate from fighting inflation to securing growth and employment?

Indeed, Bank Indonesia’s mandate is to control exchange rate and inflation stability, but it will be even better if the creation of job opportunities was added.

Q: You also have set 2045 as the date for completing the new capital Nusantara in Borneo. Will you be able to finish the first stage by August 2024?

The idea of moving the capital was an old idea since the first president, Soekarno. I am the one who is executing this but we will always need to check the feasibility studies. It will need funding of $33 billion and 20% will come from the state budget and 80% from the private sector and investments. This isn’t just for two years, it’s for 20 years. I’m confident this is a good concept with a good return on investment. I am sure many investors will come in.

Q: The worry is that your successor will not complete this new capital. You are currently very popular -- 68% approval rating. Some people close to you have suggested the legislature should amend the constitution so you can run for a third term. Can you 100% rule this out?

First on the new capital. It has been supported by 93% in parliament. What is there to fear from this development when there is such big support? Second, on the amendments, I have conveyed this many times. I obey the constitution though the support in parliament for this coalition is 84%. Once again, I obey the constitution and the will of the people.

Q: Your eldest son is the mayor of Solo and your son-in-law is the mayor of Medan. You ran as the outsider in Indonesia’s dynastic politics. Do you worry about your legacy as an outsider?

They are voted by the people, not the president. If people don’t like them, they won’t be mayors. The one in Solo got 87% of the vote, the one in Medan got 53%. I have never interfered in their affairs, because they are adults and they already have families. My business is the state.