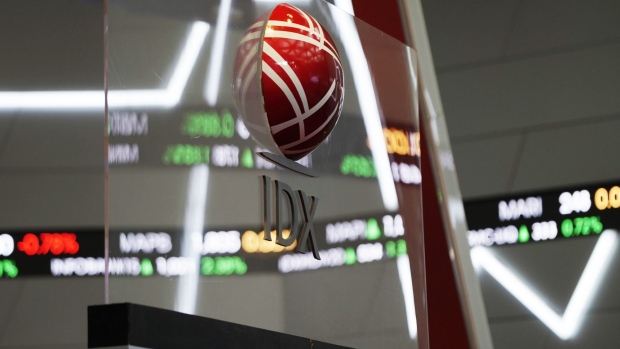 Signage is displayed inside the Indonesia Stock Exchange (IDX) in Jakarta, Indonesia, on Thursday, April 18, 2019. With Indonesian President Joko Widodo on course to win a second term as leader, the political uncertainty that's weighed on the economy this year will be lifted. , Bloomberg

(Bloomberg) -- After two years of stagnant growth, Indonesian stocks will hit a record in 2020, when President Joko Widodo’s policies to shore up the economy take effect, say analysts from JPMorgan and Morgan Stanley.

JPMorgan, which says it’s the most bullish on the Street, sees the benchmark Jakarta Composite Index rallying 19% from the current level to a record 7,250 by the end of 2020. Morgan Stanley expects the MSCI Indonesia Index to surge 11% to 7,800. Both brokerages are overweight the nation’s equities.

The Indonesian benchmark gauges are slated for their second annual decline after rallying more than 30% in the previous two years. In his final term that began in October, Jokowi, as Widodo is known, has shown an urgency in pursuing tough reforms such as an overhaul of labor laws, a roadmap for lower corporate taxes and the streamlining of multitude of rules hampering foreign investors.