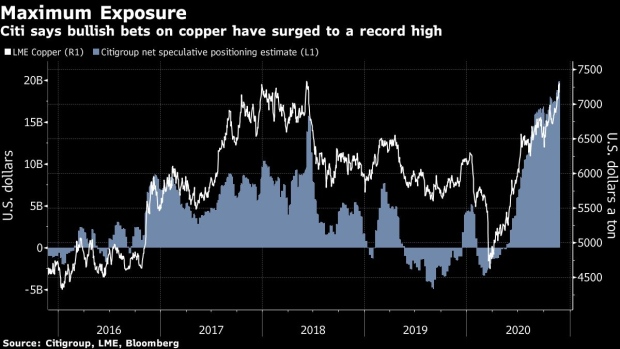 Newly-made copper cathode sheets stancd stacked on wagons before they are moved from the electrolysis shop at the Uralelectromed Copper Refinery, operated by Ural Mining and Metallurgical Co. (UMMC), in Verkhnyaya Pyshma, Russia, on Thursday, July 30, 2020. Gold surged to a fresh record Friday fueled by a weaker dollar and low interest rates. Silver headed for its best month since 1979. Photographer: Andrey Rudakov/Bloomberg , Bloomberg

(Bloomberg) -- The copper market is experiencing a wave of investor interest the likes of which it hasn’t seen for a decade.

A flood of investor dollars lifted the bellwether industrial metal to a seven-year high of $7,520 a ton this week. But traders, recalling the last major copper bull market when the metal topped $10,000 a ton in 2011, are braced for further fireworks as the prospect of a global economic rebound spurs worries about inflation, and governments plow money into metals-intensive “green” stimulus packages.

“We’re in an unprecedented situation as there’s more money than ever before sitting around looking for something to do,” says Mark Hansen, chief executive of London-based metals trading house Concord Resources Ltd. “Copper may not have had an investment theme with the potential of ‘green’ applications since the demand-driven bull market 10 years ago.”

It’s a remarkable turnaround. The copper market, like almost all of the commodities sector, has been in the doldrums for the better part of a decade. Prices fell more than 50% from their record high in 2011, trading below $5,000 a ton during a slump in 2015-16 and again in 2020.

Shares of miners slumped, as well. Specialist hedge funds focusing on commodities, such as Astenbeck Capital Management LLC and Clive Capital LLP, have largely died out or shrunk to a fraction of their former size.

But now commodities are finding favor amid expectations of a rebounding global economy, a weaker dollar and rising inflation. The Bloomberg Commodity Spot Index has risen 43% since March.

“We expect inflation to exceed current market expectations, given the unprecedented increase in monetary and fiscal policy we’re seeing,” said Evy Hambro, who helps manage $16 billion as global head of thematic and sector investing at BlackRock Inc. in London. “When you look back historically, commodities and mining-related equities have acted as effective ways to play rising inflation expectations.”

That’s true for all commodities, but copper is benefiting from more specific factors that make it a favorite bet among long-term investors. While many expect oil prices to rebound in the short-term as the world begins returning to normal, there’s more doubt about its long-term outlook as the energy transition gathers pace. Copper, on the other hand, is likely to benefit from the shift because of its use in electrical wiring.

Goldman Sachs Group Inc., which this month predicted a new “structural bull market” for commodities, argues that stimulus packages -- such as China’s new five-year plan, Europe’s Green Deal and President-elect Joe Biden’s planned package for the U.S. -- could have a similar impact as the buildout of Chinese infrastructure did in the 2000s.

“The world is re-engineering transportation, power generation, information storage and goods distribution,” said David Lilley, a copper market veteran who touts his new metals-focused hedge fund, Drakewood Capital Management in London, as seeing a return in the “high teens” since launching in May.

“Governments across the world are supporting and encouraging the transition,” he said. “The consequences for metals demand are exciting.”

There also are shorter-term factors making copper an attractive bet. Unlike oil, supplies of copper are already tight because demand is less affected by the pandemic and because China ramped up purchases as prices tumbled.

Chinese imports of refined copper and products have surged 41% this year – an increase of 1.6 million tons, or more than the annual demand of Germany. Mine supply also was curtailed by pandemic-induced shutdowns.

Still, traders increasingly see investment flows as the key driver of prices. Bullish bets on copper are at the highest on record in data going back to 2014, according to Citigroup Inc.

That might suggest the positioning already is stretched. Indeed, the bank’s analysts point to copper’s outperformance over non-exchange traded metals such as manganese and molybdenum as evidence that prices are being driven by investors.

“With physical indicators generally still weak outside of China, and no signs of deficits globally, we can say that the increase in positioning has driven prices,” Citigroup analysts, including Max Layton, said in a note last week.

All the same, that doesn’t mean fresh investment flows can’t drive prices even higher. With central banks responding to the pandemic by unleashing an unprecedented wave of liquidity on global markets, historical measures of positioning may be less relevant.

“The power of the ‘green narrative’ is important,” Hansen said. “Once these narratives get traction, which copper is on the verge of having, short-term fundamentals might not matter.”